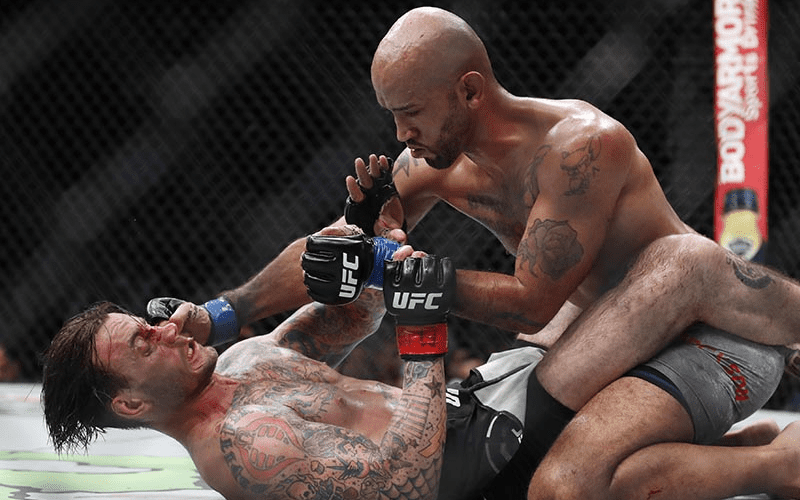 Mike Jackson took on former WWE Champion CM Punk at UFC 225 in Chicago, Illinois last month. While Jackson was successful, he may have ended his own career with UFC after he didn’t finish Punk off in their last round.

Jackson defeated Punk and both men were congratulated for their efforts. However, UFC president Dana White wasn’t happy with the way Jackson conducted himself in the octagon. Rather than ending Punk, White believes Jackson played with his opponent- something that was frowned upon.

Joining Booker T on Heated Conversations, Jackson looked to explain himself as the only platform he has seemingly had since his victory against Punk was Twitter.

Jackson believes there was no way he would lose to Punk after he stood face-to-face with the fighter. He thinks Punk was in over his head and wasn’t ready for their bout. He also adds that people don’t understand what it is like to be in the octagon unless they’ve actually competed.

“I knew before the fight that it was going to be an easy fight. I said all of this. Everything that happened I said it was going to happen. When I looked in his eyes I saw a nice guy. I saw someone–and I don’t think he was trying to prove anything to his fans, he was doing it for himself and that is what you are supposed to do it for. When I went out there and performed I wasn’t performing for the fans, I was performing for myself. When guys like [UFC President] Dana White have this criticism I can’t let that bother me and get to me because at the end of the day I am the one getting in there and fighting and criticizing me. They aren’t in there with me so when I looked into his eyes I saw a man that felt like he was content to where he was and as a fighter in the moment. Right before we walked out we were in the back, and as I walked out first I am waiting by the curtain and he’s probably a good 30 yards away from me. I had raised my hands and said, ‘Hey Phil. We touching gloves?’ He looked at me and raised his fists like, yeah, we’re touching gloves, so that was cool. For him, it was one of those things where he looked like he was content with everything, but even until this day, I don’t think he knew what he was getting into. I don’t think he was prepared for that kind of fight. I told people before the Mickey Gall fight that they were two different fighters. Mickey Gall is going to want to take him down, which he did, and I am going to want to beat him on his feet, which I did, but there are those things like you can’t really prepare for getting hit in the face and that was the difference. When I hit him with that jab the first time his eyes lit up and he realized that this fight was different. People who criticize this man have never competed or made that walk.”

Jackson claims he didn’t want to brutalize Punk in front of friends and family in Punk’s hometown of Chicago. A solid finish over Punk wouldn’t have apparently done much for the career of the up-and-coming fighter, so Jackson showed compassion.

“I’m still living my best. That is all I can do. That mute and block button works wonders. I know people come at me, but here’s the thing, maybe 5-10 years ago I would have went out there and assaulted that man just because of where I was in my life, but I am in a different space right now. For me, I’m not worried about all this negativity that people present. I went out there and fought my fight, and I didn’t want to hurt the guy. People are legit upset with me because for not hurting him. People came up to me and said that they are going to start calling me ‘Mike the Merciful’ because I went out here and I showed compassion for another human being and I didn’t want to hurt him because I knew what the circumstances were. Everyone was looking at this fight as if it were a number-one contenders spot or something like that. It was my WrestleMania, my title shot, but at the same time, I knew what it really was. I didn’t have to go out there and really hurt the guy in front of his people. I went out there and we put on a show—I think if people would take that theory that I disrespected the sport because I didn’t finish him; if you can take that aspect out of it and just appreciate the fight for what it is people would like it more, but people are so caught up in the hype.”

Finally, Jackson denied showboating and said it looked that way as people couldn’t understand the strategy he was using. Certain camera shots make the fight look a certain way, so Jackson is glad there were three judges to see everything.

“The whole thing about me showboating and taunting–I wasn’t doing any of that. What happens is that you have the camera on you in one particular angle and if you are in the arena you are watching through one vantage point so you are not seeing the entire picture. I had somebody ask me afterwards with the post-fight press conference we talked about it. I had asked one of the reporters whether or not I was showboating in the fight and he said that in the moment it looked like I was, but that he remembered what I had said in the post-fight interview, I went back and watched the fight and then I realized where you were coming from. I get it, you can only watch it from that vantage point. That is why you have three judges, just in case someone misses something.”

It is unknown what both Punk and Jackson do moving forward, given the result of their fight and the comments made by White. Stay tuned to Ringside News for more information on where they go from here.

Did you enjoy the fight? What are your thoughts on Jackson’s comments? Sound off in the comments below.

WIth H/T to Wrestling Inc for the transcriptions within this article.