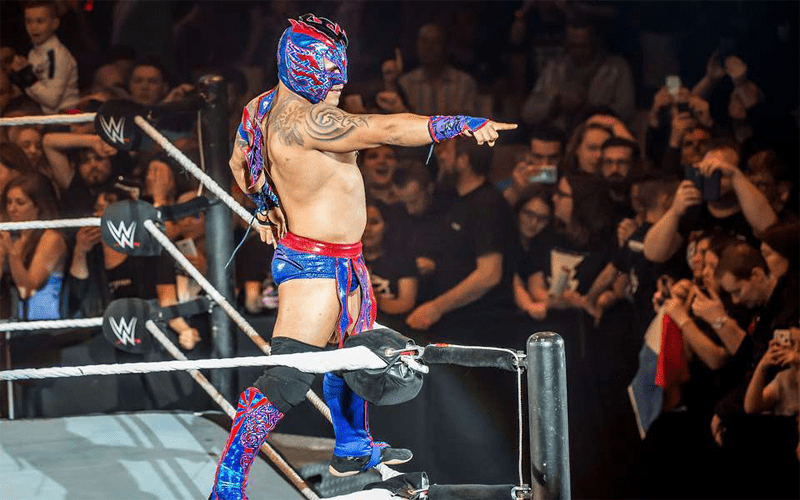 A luchador is very fond of their mask. In fact, the masks play into the rich history of lucha libre. Accidents do happen in wrestling, some worse than others. The latest of these involved former Cruiserweight Champion Kalisto being accidentally unmasked during an Anaheim show.

While WWE and other promotions like to play on the mask of a luchador being ripped off, rarely does there come a time when any action is taken. As the mask for many can be sacred, Superstars and companies alike are very careful about booking any spots involving the attempted removal of a mask.

During a live event in Anaheim, WWE Cruiserweight Champion Cedric Alexander went one-on-one with Kalisto in what many expected to be a terrific match given the success of the 205 Live show and their match at the Greatest Royal Rumble earlier this year.

Unfortunately for both competitors, not everything went to plan. During the match, Kalisto had his mask come off. As he found himself hiding in the corner with his hands over his head, the referee was forced to slide over, grab the mask from the canvas and hand it to Kalisto so he could exit the ring and put it back on.

Alexander was the target of a lot of boos when this happened. The spot was not planned and neither man was at fault. There are a lot of Kalisto fans in the Southern California area which may have added to the reactions Alexander received. Listen in the clip below at the crowd reaction to the unmasking.

The match would continue after Kalisto got back to the ring, with Alexander hitting the Lumbar Check to end the match. Props go out to Kalisto for continuing and finishing the match after this incident.

Do you enjoy Kalisto on 205 Live? Have you ever been to a live event and had an incident such as this happen? Sound off in the comments below.