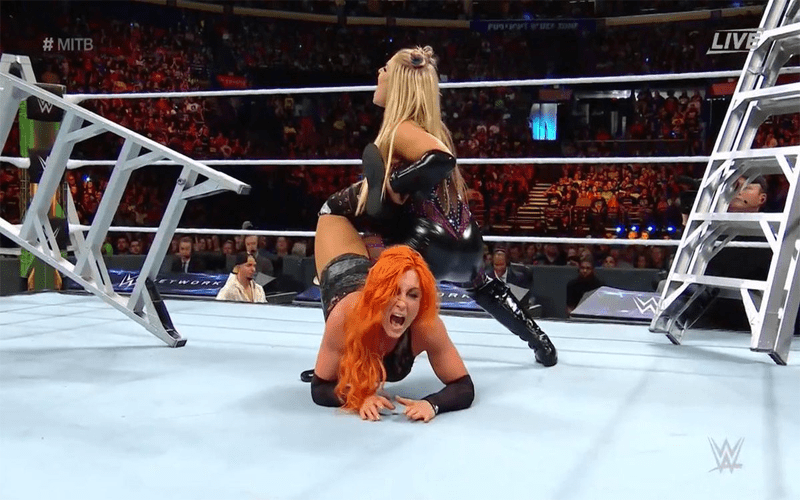 RAW Superstar Natalya was one of four women from her roster to enter the Money in the Bank Ladder match at the pay-per-view of the same name. While she was not victorious, she made an impression, as did all the other competitors she went up against.

During her regular column for the Calgary Sun, Natalya spoke at length about how she felt leading up to, in and after the women’s Money in the Bank match. As you may recall, Natalya was also in the first Money in the Bank match and the SmackDown rematch last year. That was ultimately won by Carmella,l who is the current SmackDown Women’s Champion.

Natalya confirms the majority of women who hadn’t participated in a Money in the Bank match up to that point were all feeling anxious and felt the pressure to deliver a memorable and quality match.

The former Divas Champion reports that she gave Lana, Sasha Banks, Alexa Bliss, Naomi and Ember Moon advice on helping them succeed. She relayed advice given to her by Fit Finlay, who had suggested to her to go back and watch some of the larger Ladder matches.

Natalya confirmed that the match exceeded every expectation set by the company and the competitors themselves. In fact, Natalya believes this iteration of the women’s Money in the Bank match was better than her last.

The Superstar notes several huge spots in the match that she felt were enjoyable and showcased the grit and determination all these women had. She also reminded fans that Becky Lynch almost won last year as well as this year.

Natalya ended her column with the following paragraph, summarizing her experience and reaction to the match:

We did it! Every single female Superstar in our match had a moment to shine, giving each a chance to break out and take their careers to another level. The women of WWE came together again in competition to make history. We proved that the women could be just as creative and athletic as the men, if not better. After all, there’s nothing we can’t do if we are given the opportunity.