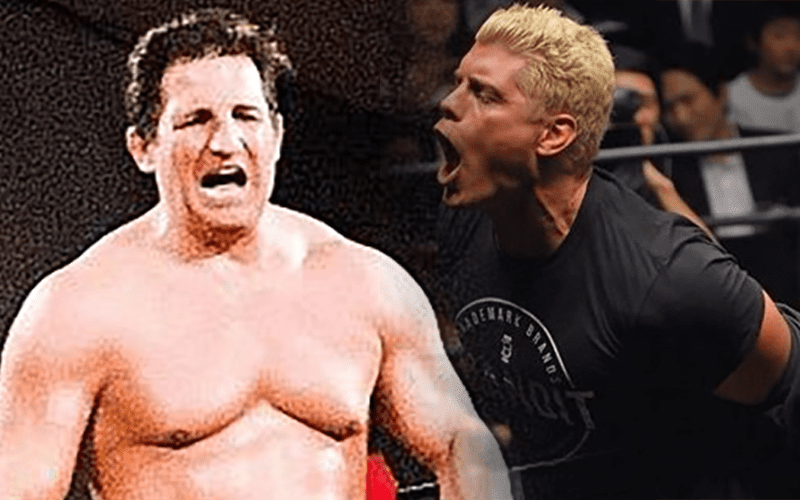 Disco Inferno debuted back in 1991, arriving in World Championship Wrestling in 1995. From here, Inferno would really kickstart his wrestling career. In WCW, Inferno captured four different Championships. He has also prominently worked with Impact Wrestling in some capacity over the years.

Earlier this year, Inferno was under fire due to comments he made about the current nature of the professional wrestling business- specifically noting the injury Cody [Rhodes] sustained during an attack by Kenny Omega. Inferno had mentioned wrestlers are more unsafe now and there is more of an emphasis on pageantry and acrobatics than tough, physical fights.

Appearing on “The Matt Riviera Show,“ Inferno looked to explain himself. He wanted, in effect, to clear the air on what he meant with his comments. Inferno personally feels as if Cody misunderstood what he said.

” I think he completely misinterpreted what I was saying because I wasn’t burying him….I’ve worked, I’ve been on a writing team, and I’ve been an agent, okay. So, if I’m critical of somebody, like wrestlers, like I do sometimes on the podcast… It’s not anything like if I was their agent, I wouldn’t be saying right to their face.. of course, the fans are going to say, ”Oh, you’re just hating him”. No, I’m not hating, this is what I did for a living… That’s the perspective that I’m critical on commentary with professional wrestling these days.”

On this note, Inferno continues to explain why he feels professional wrestling today has lost the core value it once held so highly.

“Professional wrestling is predicated, and always has been… two guys wrestling/fighting each other. That’s the concept… so when everyone talks about psychology… If you do things that don’t look like something you would do in a fight, that’s bad psychology. Because if you’re just taking a bunch of acrobatic maneuvers and acrobatic spots… and try to insert it into the concept of professional wrestling, which is supposed to be a fight, it just does not make sense… Now we have this younger generation of people that grew up, that didn’t watch that wrestling, when it was like a suspended disbelief and pretending two guys are in a fight, they’ve accepted this as professional wrestling. That it’s acrobatics, it’s spots, it’s a performance… and that’s kind of where wrestling’s lost its way… The shows now are just a bunch of critics that kind of just applaud the performance. They’re not emotionally invested…”

To conclude their discussion, Inferno discusses with Riviera what his thoughts are on the devastating series of injuries wrestlers have been receiving for the past few years as the style of wrestling prominent in the industry becomes more high-octane and fast-paced.

“The one thing I see in the business that kind of bothers me is that, as wrestling’s gotten, like the quote-unquote “evolution of wrestling” is that, you know, back in the day… when I got hurt, I hurt my back. When the guy’s got hurt, they hurt their knee, they hurt their shoulder… We’re at a stage in the business where, back in the day, if guys were watching, like the way the guys work today… We would tell the guys, “What the hell are you doing? You guys are killing each other out there.” I’ve never seen a time in the business where guys are hurting each other. Not like hurting their shoulders or hurting their knees… They’re hurting each other, because they’re doing things that look like they hurt, and they do… Everybody was a mark for Benoit… You watch Benoit, Kurt Angle, and Edge all had neck injuries that were serious neck injuries… What did they do every match? German suplexes… 6, 7, 8, 9 German suplexes… You look at the move, regardless if it’s a work or not. You’re landing on your neck constantly. Constant stress on your neck that’s going to add up… you can’t do that… Alex (Wright) would do a German suplex to me one time, and it was a finish. ”

It is unknown at this time whether Cody or possibly IWGP Heavyweight Champion Kenny Omega will respond to these comments.

What are your thoughts reading this? Do you understand Inferno more? Does he not understand wrestling as it is today? Sound off in the comments below.