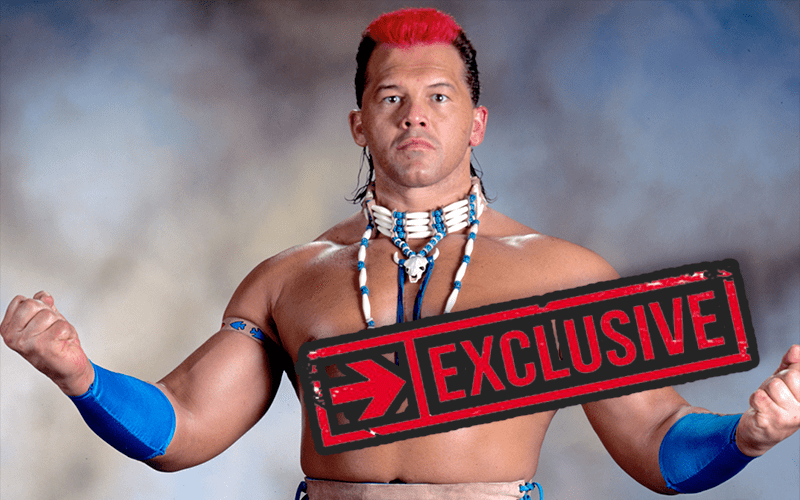 I got the chance to speak exclusively to WWE Legend Tatanka in a two-part series for Ringside News recently. Tatanka touched on many subjects from his undefeated streak on WWF television, to why he never won the Intercontinental Championship at WrestleMania IX. Below are some highlights from the first part of the interview series:

Tatanka on his two-year undefeated streak on WWF television:

“Every time I came to the ring announcers would say, “There’s Tatanka, he’s undefeated on tv. Nobody has defeated him yet.” They highlighted it during the whole time and that elevated my career without a shadow of a doubt.”

NOT holding any WWF/WWE gold:

“People were asking me at today’s signing, “Well, we’ve never seen you with a championship belt.” The belts were different. In today’s business, they’ve lost there meaning because they exchange hands too much. The belts back then, they were a tool to get someone over the top. The company also used other ways to get people over, like having a two-year undefeated streak. When it comes to the belts if you’re already a fan favorite, you don’t need a belt.”

Tatanka on his first televised loss:

“While they referred to me as The Undefeated Native American Tatanka. I finally had that first defeat against Ludvig Borga on tv, with the help of Yokounza with Mr. Fugi, it really meant something. You know, fans were like, “Oh my gosh!”

“They(WWF) really liked him and wanted to push him. Not like a Hulk Hogan but they wanted to give him a strong push, but he just didn’t get the flow of things in the ring. He was too robotic. They used him to defeat me so they could elevate his career. So it shows you just how important that two-year streak was.”

Tatanka on what it takes to be a wrestler:

“At the end of the day, the best guys in this industry are the ones who are athletes. Fluid, smooth in the ring You have to be smooth in WWE.”

His athletic background and not signing with the NFL:

“I played little league, junior high school, high school. The high school I played for Bethel High School. We were state champions, triple state champions. I was proud to be part of that. I had a scholarship to James Madison University. Had an agent pick me up for a bunch of teams but I zeroed in on The Dolphins. I did all the tryouts, made the cuts.”

“They offered me a free agent contract, and back in that day a free agent contract was $70,000 the first year, but after that, you could renegotiate, and it could be a multi-million dollar contract. I was working at Bally’s and already making $100,000 a year. They were already grooming me for a $250,000 a year. I myself did over one million dollars in sales for them so I was already doing fantastic. One little injury in the NFL you’re done.”

“A lot of people say to me “You could have played in the NFL.” Well, around the same time I met a wrestling scout who introduced me to the legend The Nature Boy Buddy Rodgers, who Ric Flair got his whole character from. He directed me to the Monster Factory, which is one of the biggest schools in Paulboro, New Jeresy. Within one year I was signed to WWF.”

“In our business guys can work and move in our business with injuries. We’re not just playing one game on Sunday The reason for that is we’re on the road 250-300 days a year.”

Friendship with The Undertaker:

“This guy joked with me all the time and we became very good friends, Mark Calloway aka The Undertaker. I was doing my poster shoots when I first came in and he was joking with me, “Look at this young kid getting posters and merchandise already.” Mark is a really really cool guy and we hit it off. MY first five years we traveled together. He done tremendous. He’s an icon in our business.”

Why he never received a rematch against Shawn Michaels after his WrestleMania IX victory:

“Shawn is another icon in the industry, a great worker in the ring. If you’re talented yourself you can go out there with Shawn and have a tremendous match. We had great build ups to WrestleMania IX. During the build up I beat him in a six man tag match, and I think a singles match, I can’t remember, so going up to WrestleMania I already beat him twice. I believed in working hard, gets you where you need to be and it does.You have to put body, mind, spirit into something to be successful.”

“Taker  did not want me to lose my spot, “You’ve got a great spot, you’re doing fantastic but last year Shawn went around spreading rumors with his Kliq that you were getting an attitude, they were going to give you the belt.” I was getting “an attitude,” and they changed the disicion to a countout. Thats probably why you didn’t see a rematch.”

“At that time I was undefeated, I was very hot, the fans connected with me. At WrestleMania IX after they rang the bell I did my warcry, the whole place lit up. They wanted me to win the title that night, but also Shawn knew the build up, being undefeated, a fan favorite. During that time, you kept belts for a long time and Shawn knew if I won the belt I’d have it for awhile.”