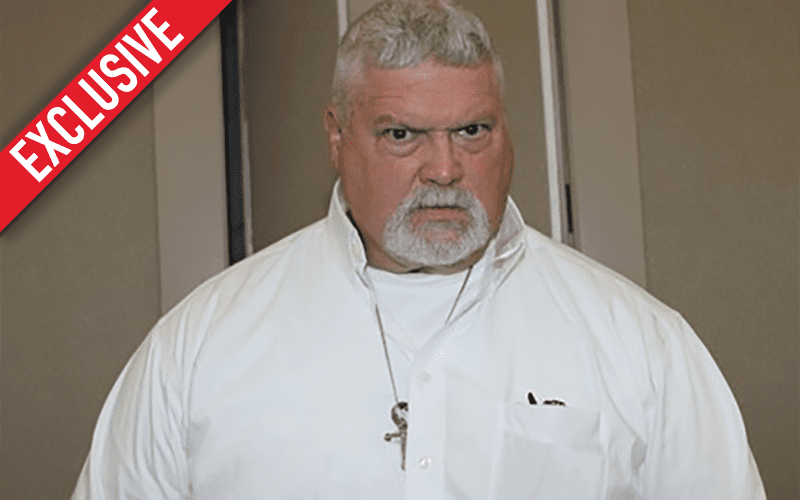 I got the chance to speak exclusively to Fred Ottman (Tug Boat) for Ringside News while at the Albany Comic-Con through Scott Wilder Promotions. Ottman discussed an array of topics from his Tugboat, Typhoon gimmick, Shockmaster gimmick and more. Below are some highlights:

Ottman on coming to WWF and instantly being a top Superstar:

“Oh man, I had to pee four or five times everytime I went to the ring I was so nervous. I was working with the greatest guys in the business, and working in coordination with the man himself, Hulk Hogan. It was incredible, that’s all I can tell you.”

Ottman on transitioning from Tugboat to Typhoon:

“I can’t give you the behind the scenes stuff, but all I can tell you is there are still people to this day more for turning on The Bushwackers than me turning on Hulk Hogan. Basically, Jimmy Hart made me a deal I couldn’t refuse. Everything else was history afterward, me and Earthquake became The Natural Disasters! I mean, my Mom always told me I was a natural disaster and then I became one in real life.”

On having The Mouth of The South Jimmy Hart as a Manager:

“Oh baby, baby, baby, baby I need a peppermint (mocking Hart’s voice).” It was awesome. Jimmy is high energy 24-7. I mean, he is a legend in the music industry, a legend in professional wrestling. You know if Jimmy Hart is involved, there will be a lot of championship matches involved. He was a great manager.”

Ottman on if The Natural Disasters should have had a longer tag team title reign during their face turn:

“I think so, I think we should have had a longer run. To be honest with you, at that time we were just baby faces, we were heel faces. We still got to kick butt and you can ask all of our opponents as they felt the ever mounting presence of The Natural Disasters. It was great, people accepted us and even the people who hated us were a little nicer to us.”

Ottman on what WCW would have done with The Shockmaster if he did not trip:

“I don’t know. It was a scary situation for the office because they didn’t know what to do. They were still in shock themselves, what an appropriate deal. After that fopa happened, The Shockmaster became The Super Shockmaster. He had the lucha style tights. I worked about 12-15 venues that way, and then Uncle Fred came way and the rest is history. It would have been good, and I think it would have been good for me because I woud have been a comic book character in the wrestling ring. I could kick some butt, have fun, thats the whole deal with this business, you have to enjoy what you’re doing.”

“Well it wasn’t the first time remember he fell during NXT with the keg. I was really praying for him that he didn’t hit the side rails of the ring and knock himself out. People don’t realie whats under the ring. He’s a great guy, he took the ribs fro the guys in the back just like I did back in the day. I hope he getsas much success out of it like I did. As I see here, you’re wearing a Titus World Slide shirt. I must have it. I want to have a shirt made with him doing a passing of the torch or fumbly, crumbly guys like myself.”

Special thanks goes out to Scott Wilder Promotions for setting up the interview.

NOTE: Feel free to use any of the above quotes for your website with a H/T to Ringside News