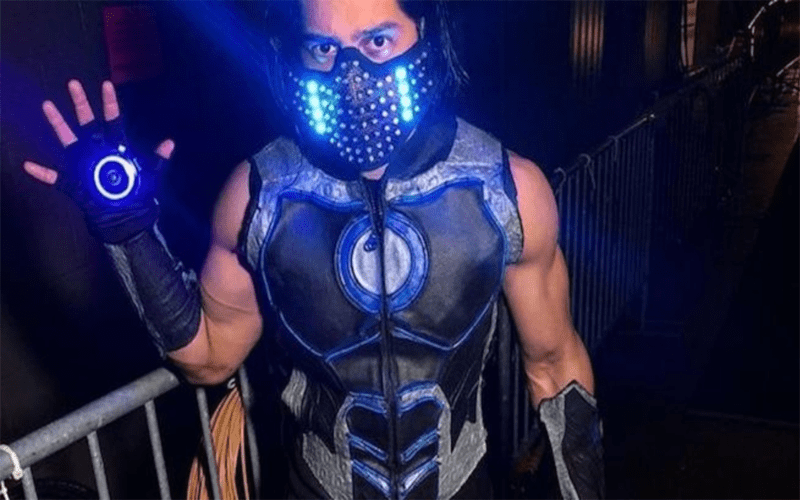 WWE 205 Live Superstar Mustafa Ali has been called a Superhero in wrestling gear in the past. Those comments are coming up again, as Ali has decided to donate his light-up mask to a fan with a medical condition.

A wrestling fan by the name of Jamie took to her Instagram account to comment on how Ali has helped her throughout her medical condition. Jamie wears what is known as a vogmask, which is an item used to protect people from tiny airborne particles. Some severe asthma sufferers wear these masks. To Jamie, the mask Ali wears is identical in the shape and functionality.

“I watch WWE programming almost religiously and one performer who has recently caught my attention whole heartedly. I hadn’t paid much attention to #205live before Wrestlemania of this year, but that changed quickly. I was wearing my vogmask because the pollen counts were high and I saw this man (@mustafaaliwwe for those who don’t know him) wearing something that looked so close to a vogmask I wanted to cry. It made it feel normal to have to wear the mask like it was ok to need the stuff that I do. I know you hear that #representationmatters when it comes to stuff like ethnicity and seeing prominent women’s roles, but seeing someone wear something close to the medical equipment I need to function daily gave me a newfound sense of self-confidence.”

It seems Ali took notice of the post, as he took to Twitter to share an emotional video to his followers, directed towards Jamie herself. In the video, which you can watch below, Ali talks passionately about wanting to create light in a world of darkness, before he offers her the mask and requests that she accepts it.

I saw your post on Instagram about how you have to wear a mask to deal with your medical conditions. I've got an idea on how to make that mask look a little cooler. 💡 pic.twitter.com/x5fzWhpEex

During an Instagram story after the announcement by Ali, Jamie was nearly brought to tears. It is therefore logical to believe she will be receiving the light-up mask as Ali requested.

Day by day, it seems Ali further proves himself as a Superhero to many fans of varying backgrounds and ethnicities. Would you like to see Ali capture the WWE Cruiserweight Championship in the future? Sound off in the comments below.