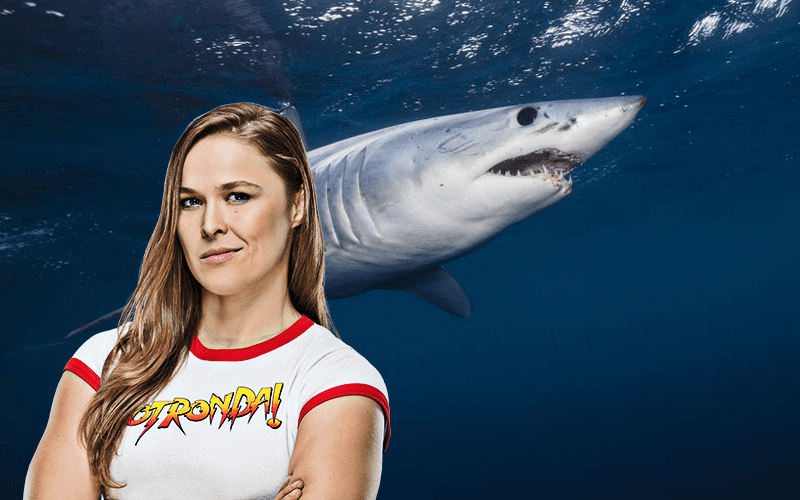 We previously reported that WWE RAW Superstar Ronda Rousey was scheduled to participate in The Discovery Channel’s Shark Week. We now have an update to that story, as her role has been revealed.

According to PWInsider, Rousey has been traveling around the world for her special as part of the 30th annual Shark Week on The Discovery Channel. The title of the special she is involved in is “Uncaged: Shark vs. Ronda Rousey.”

Throughout the past few weeks, Rousey has been to Fiji and New Zealand. In both locations, the number one contender for the RAW Women’s Championship filmed material for the special.

Check out what the promotional material for the special has to say below.

“Olympian, MMA champion, and current WWE Superstar Ronda Rousey is trained by shark conservationist and shark attack survivor Paul De Gelder to face her fiercest opponent yet: the fastest, bitiest shark in the world, and the ultimate fighter of the sea, the mako shark. First, Rousey, in a cage dives into the ring with several lightweight shark species in the waters off Fiji and then moves onto the main event in New Zealand where she’ll ‘free dive uncaged’ with the heavyweight mako shark. Ronda is out to prove that harnessing the fighting spirit she has developed throughout her career, she and everyone watching, can confront their greatest fears and be victorious in the face of those doubts.”

If you are interested, Shark Week is scheduled to air from July 22 through to July 29 on the Discovery Channel.

Will you be watching this special?