WWE’s Extreme Rules event is set for July 15th in Pittsburgh PA and a couple of matches have already been announced for the show.

According to the PPG Paints Arena’s website, the main event of the show will be a six-man tag team match between Roman Reigns, Braun Strowman, and Bobby Lashley vs Kevin Owens, Sami Zayn, and Jinder Mahal.

It was also noted in the Wrestling Observer Newsletter that Daniel Bryan vs Samoa Joe is announced for the event but it looks like the arena changed it because the current match listed for Bryan is another encounter with Big Cass.

Other top Superstars were announced to be there but no other matches are on the site at this point. It is also notable that Brock Lesnar, John Cena, and Ronda Rousey’s names and faces all seem to be missing from promotions at this point. 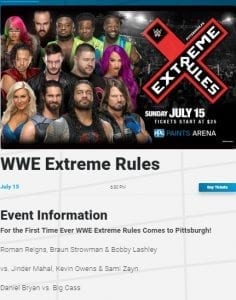