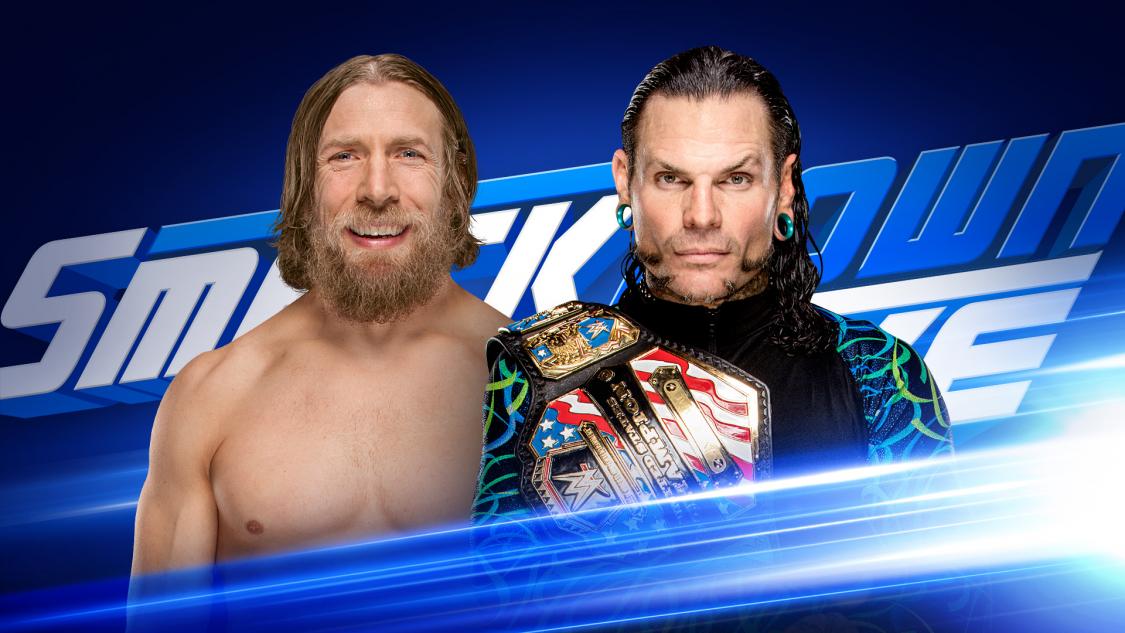 Smackdown Live kicks off with Miz TV and his guests for tonight are The New Day.

The Miz talks about how one member of New Day will go on to the Money in the Bank ladder match. He asks who it’s going to be and a loud “WHO?” chant. The Miz rephrases and asks which one is it going to be? On three they all say “It’s going to be me!”. The Miz jokes about how they are NSync. The Miz says they are all holding each other back. Xavier Woods says that’s the difference between themselves and The Miz. He has a lot going for him, he’s a grand slam champion, the Marine franchise and so on. Xavier calls him a living legend. But the thing that no one likes about him is that throughout his entire life and WWE career, he always makes sure that Miz comes first. The Miz says that the difference is he has won Money in the Bank, cashed it in and won the WWE title.

The Miz then says that Kofi has been in six Money in the Bank ladder matches and won zero. He then says Big E has the it factor, the fire, the speed, the strength. Everything to be a true champion. However he’ll never be taken seriously because he doesn’t take himself seriously. But someone who takes themselves very seriously is Xavier Woods. The Miz says he has a Youtube empire with Up, Up, Down, Down with over 1 million subscribers. The Miz says imagine streaming a game of Fortnite while wearing the WWE championship. He says each of them has a chance of making history. And he asks again, who?

Xavier says with all of that said, it’s going to have to be Big E. Big E says or Kofi. And Kofi says or Xavier. The Miz says no, they’re here for him to get the scoop. And he says he will go out of Money in the Bank with the contract and he can beat anyone of them any day of the week. The New Day then huddle and Kofi says that he made the decision for them. Kofi says it’s going to be Big E. The Miz says Big E will be in the Money in the Bank but Xavier interrupts him and says oh no, they are talking about tonight. The Miz says they want Big E versus himself right here, right now? A loud “YES” chant from the crowd. The Miz says if he doesn’t get what he wants, they won’t get what they want. They then all throw pancakes at The Miz while yelling “SHAME” as he leaves the ring.

Backstage The Miz is with Paige. She says she gets it, not everyone likes pancakes. The Miz says that is very funny. Paige says that when he was out there, he said he can defeat any member of New Day any day of the week. Paige asks him to go do it right now.

Big E vs. The Miz
Back from commercial and Xavier Woods is at ringside doing commentary. Both men lock up and a back toss by Big E. The Miz wants a test of strength but kicks Big E and starts pounding on him. Big E then gets The Miz in an abdominal stretch. He then releases the hold and starts stomping on The Miz on the ring apron. Big E then delivers a big splash on the ring apron as The Miz rolls onto the outside.

Big E then sits on a stool as Kofi and Xavier pour syrup on him and he spits in a bucket. He goes back to the Miz as but The Miz throws him onto the security rail.

Back in the ring and now it’s Kofi Kingston is doing commentary. Big E with a belly to belly suplex. With The Miz down, Big E delivers a big splash. He goes for the cover but a two count only as The Miz kicks out. The Miz rolls onto the ring apron. Big E goes to spear The Miz but he blocks it. Back in, The Miz with the DDT as he goes for the cover but Big E kicks out. Both men get back up and a double clothesline as they both go down.

The Bar run down and take out Xavier Woods as Kofi flies off the steel steps onto both men. A brawl on the outside of the ring. Cesaro gets on the ring apron as Big E goes to take him down but The Miz with the Skull Crushing finale. He goes for the cover and gets the three count for the win!

A video package of last week’s Smackdown Live from London airs where we see Daniel Bryan beating up on Big Cass.

Back live, we see Big Cass on crutches backstage and the announcers state that he is not medically cleared to wrestle tonight. It’s announced that due to the injury to Big Cass, it will be Daniel Bryan versus Jeff Hardy tonight with the winner facing Samoa Joe next week for a spot in Money in the Bank.

Backstage, Daniel Bryan is asked about tonight’s match. Daniel says the match tonight means everything. No one knows more about second chances than he does. Tonight, if he wins, he will enter Money in the Bank. Bryan calls Jeff Hardy a legend. He says he likes a good challenge and tonight he will tap a legend out.

Billie Kay vs. Lana – Money in the Bank Qualifier
Aiden English is on the microphone. He introduces Lana to the ring. The IIconics come out and they prepare to do a duet. A loud “RUSEV DAY” chant from the crowd. Both women sing “Lana is a loser” and congratulate each other. They say that when they win Money in the Bank, Smackdown will become iconic.

The bell rings and we are under way. Aiden grabs the microphone and pulls out a big “LANA DAY” sign as he starts picketing outside the ring. Peyton slaps him while Billie Kay follows her to the outside. Lana attacks Peyton taking her out. She grabs Billie and throws her back into the ring. She kicks her to the head and slams her head into the mat. She goes for the pin and gets the win as fans start to chant “LANA DAY” and she celebrates with Aiden English.

Backstage Vega cuts a promo talking about Andrade Cien Almas. She says he is the future of Smackdown Live.

Andrade Cien Almas vs. Unknown Opponent
Cien Almas makes his way down to the ring alongside Zelina Vega and he’s up against an unknown talent. The bell rings and Almas with right hands and a clothesline. He starts stomping on his opponent. Down in the corner, Almas with two knees to the face. Almas delivers the hammer lock DDT and gets the win.

Backstage, Caremlla is wearing an Asuka match and is asked about Asuka. Carmella says everyone is a hater waiting for her to slip and fall. She says everyone is afraid of Asuka but she isn’t. At Wrestlemania, Charlotte beat Asuka and she beat Charlotte twice. If anything, Asuka should be afraid of her.