Some people found it rather interesting how Ronda Rousey’s singles match was changed to a six-woman tag. You can watch Rousey’s match here as she teamed with Natalya and Ember Moon to take on Mickie James, Ruby Riott, and Liv Morgan.

But some fans found it interesting that Sarah Logan didn’t seem to be at ringside. From the looks of things, she might already be back in Florida if her Instagram story is any indication of things. 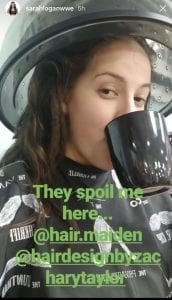 Of course, Logan could have sent that Insta Story out from anywhere on the globe. But Logan’s exit from the tour could also explain Liv Morgan’s tweet featuring herself and Ruby Riott where she summed up the picture with a Tupac song lyric.

All I need in this life of sin is just me and my girlfriend pic.twitter.com/hsGXlVSd45