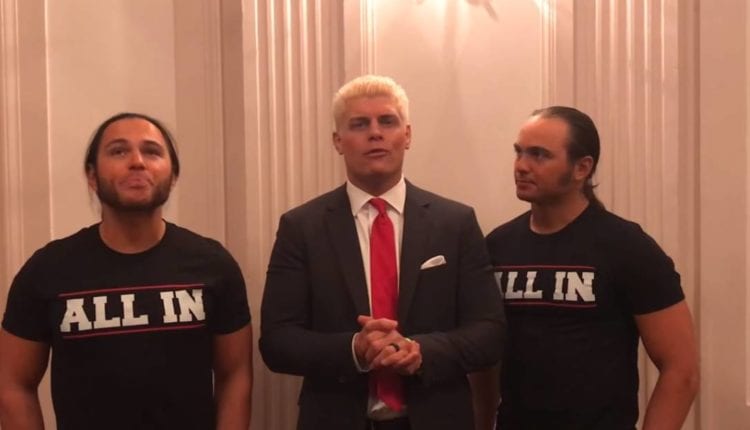 The All In show brought even more attention to what Cody Rhodes and The Young Bucks have been up to. They consider themselves pro wrestling’s elite and their idea for a 10,000 seat show off of a bet is now happening and sold out as well.

Dave Meltzer spoke about All In during Wrestling Observer Radio where he went into detail comparing WWE’s last comparable event in Chicago.

“This was a real unique thing. The last Chicago show [NXT did] was 8,000 people in the All State Arean which was May 20th, 2017 show that was the one the TakeOver with Bobby Roode and Hideo Itami, Authors of Pain against Ciampa and Gargano in a ladder match, Tyler Bate/Pete Dunne which was maybe the best match in WWE all last year. That was an exceptional show too.”

But for some reason, WWE couldn’t sell 10,000 tickets to the Chicago show. While it is true that scalpers do have a big part to play in things, tickets for the All In show are now sold out with Cody Rhodes and The Young Bucks in the center of it all.

Naturally, WWE might want to cut the legs out from under this groundswell of support for indie wrestling by signing either Young Bucks or Cody Rhodes to deals. But as Meltzer continued to discuss that might not be a possibility anytime soon.

“The reason [indie wrestling] got so strong is because it is a star-driven business. If that star power leaves, if they get hurt, if the go to WWE and there’s no replacements it could make a big difference.”

“Some of these guys are not easily replaceable as fas as the star power goes. WWE’s going to be after all of them. So that’s the situation. I’ll tell you what as far as Cody and The Young Bucks go, I don’t know how long Cody’s contract is but obviously the Youg Bucks’ contract ends at the end of this year.”

“But they’re sure in great shape as far as when their contracts are up. They can probably get themselves a nice raise right now if it’s a contract year because this is a pretty good time to look like stars and that’s what it’s all about.”

It looks like WWE might want to bring in these hot commodities sooner than later. But it’s not so simple when you’re talking about guys who are bringing in this much money on their own.