Jericho informs that just days before this year’s WrestleMania he got a call from Vince McMahon who told him about Shane’s injuries. Shane was in the hospital with a staph infection and a hernia and Vince was wondering if Jericho could make it to the event to replace Shane in the event that he couldn’t get cleared to wrestle. 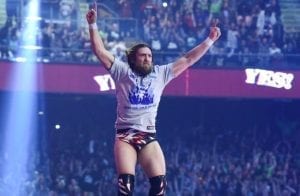 Bryan informs that nobody told him about that, adding that WWE officials don’t tell the boys anything anymore because they’re afraid that the boys will talk to the dirt sheets. He spoke to Shane on the phone who told him he was in the hospital, and that’s when WWE officials told him that they had a replacement ready but they couldn’t tell him who it was. Nonetheless, Bryan had a pretty good feeling that it was Jericho.

Jericho told Vince he could make it to WrestleMania just in time after finishing up his Fozzy show in another State, but joked that Sami Zayn would lose his mind if he had to call the entire match in the ring without things planned beforehand. A few days passed and he received another call from Vince, who said that Shane was going to wrestle now and Jericho couldn’t believe that Shane was being cleared to wrestle.