Drake Maverick was known as Rockstar Spud back in TNA and he transitioned himself into General Manager of 205 Live.

The cruiserweight authority figure might call the shots on Tuesday nights but he obviously isn’t immune to the occasional ribbing. It looks like Kalisto decided to play a little prank on Maverick recently and Drake documented the incident for all to see.

It’s not much of a rib but it was obviously intended to be a playful way to notice Drake Maverick’s car was in the parking lot. 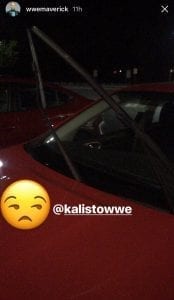