Edge and Christian open today’s show by speaking about last Friday’s Greatest Royal Rumble event. They both inform that they haven’t had a chance to watch the entire event, but they saw a few highlights. The one spot that everyone was talking about after this event was Titus O’Neil’s fall during his entrance. Christian thought O’Neil handled it well, and Edge points out that O’Neil didn’t have much choice but to play along with everyone and laugh at himself.

Christian started to wonder how he would have handled that situation if he were in O’Neil’s place, and he thinks he would have continued to crawl under the ring so he would have came out on the other side. He then would have played it off as if he was trying to do it all along. Edge agrees, noting he probably would have done that as well if he was O’Neil. 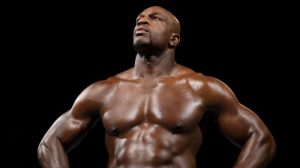 Christian notes that O’Neil is a great guy who spent hours talking to him on plane rides about the business. Christian really appreciated O’Neil’s drive and determination to learn the wrestling business and to get better as a performer.

The other spot that caught Edge’s attention during the event was Roman Reigns’ spear through the ropes which concluded the Universal Title main event. He says that if someone would have pitched that idea to him he would have told them that it wasn’t going to work.