Raymond Rowe and Sarah Logan were a couple long before they both ended up with WWE. Rowe is still in NXT with Hanson as The War Raiders and Logan has her Riott Squad on Raw. But when they’re not in the ring the couple loves to spend their time doing all things Vikings.

Rowe recently tweeted out a picture of the pro wrestling couple in their usual garb while attending a Viking retreat. This sparked a conversation that ended up with Rowe confirming the two had 1000% intentions of having a Viking wedding when they do tie the knot. 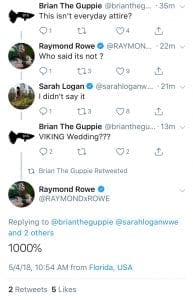