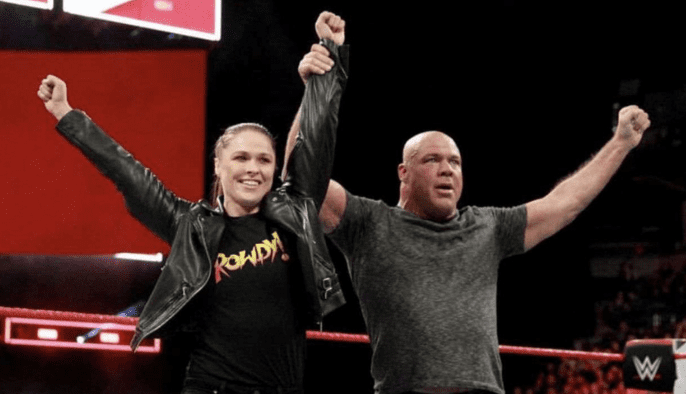 The Olympic Hero and current Raw General Manager made his in-ring return to WrestleMania this year, teaming up with the WWE’s most notable new signee, Ronda Rousey. While the Rowdy One certainly received her fair share of critics from all corners of the world (especially the IWC) her debut bout in New Orleans not only lived up to it’s incredible hype, but can even be dubbed Match of the Night. The very idea that someone’s first match EVER could steal the show of shows seems ridiculous with a card that included Shinsuke Nakamura versus A.J. Styles and Charlotte versus Asuka, but it would be hard to argue that the WWE Universe didn’t respond the most to that very odd mixed tag encounter. They’re not the only ones who were surprised.

In an interview with USA Today’s For The Win, Angle even admitted that he was not expecting for Rousey to get the response that she did, nor did he believe she could set such a standard in her first outing. He was happy to be proven wrong:

I had my first match on my third day in the business. I didn’t necessarily see Ronda in that light, what I saw was Ronda getting an opportunity where we trained her, for this match, and we didn’t know how it was going to pan out. She knew what she had to do, she knew how the match was supposed to play out, but very seldom do you find a talent that their first match is WrestleMania.

I wouldn’t do that to myself. When I was starting out, there’s no way in hell I’d want that opportunity – because there’s no way but down. Ronda was able to not only prove a lot of people wrong, but, I mean, she stole the show.

It was a great structure. Triple H and myself, we structured the match, but it was her that went out there and did it. She performed beyond our expectations. We… we weren’t nervous that she was going to fail, we were just nervous that maybe the fans wouldn’t take to her the way they did. And they did – they took to her from the beginning, and she just got better as the match went on. Not only with her technique, but her facials, and the way she took her time. She acted like she was a seasoned veteran, and she’s not.

Credit should certainly go to both Triple H and Kurt Angle for laying out the plot points, but at the end of the day this business is based on performances much like in the theater world. Rousey’s performance was exceptional, and I am excited to see what her future in the WWE brings.