Ross returns this week with a new podcast on WestwoodOne.

He opens this week’s show by speaking about his thoughts on WrestleMania weekend. He begins by talking about the NXT Takeover event, which he thought was fantastic. He thought the opening ladder match was incredible, and he was a big fan of the NXT Women’s Title match as well. He thought Ember Moon and Shayna Baszler over-delivered based on their limited in-ring experience.

Ross was a big fan of Mauro Ranallo’s commentary work on this show, pointing out that Ranallo had a “great night”. Ross thinks Aleister Black is going to be a big star on the next level, adding that Black’s the real deal. He also loved the Johnny Gargano/Tomasso Ciampa match because those two men played with our emotions and all the fans were invested in it. He called this match, “magic”. 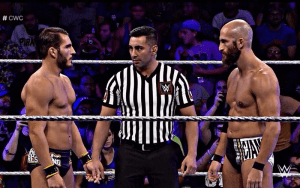 Moving onto the WrestleMania card, Ross informs that he called the Andre the Giant Memorial Battle Royal match at 4:30, and he was back in his hotel room by 5:30. He preferred to relax in his hotel room while watching the show so he could take notes. He notes that the 7-hour runtime was quite long, and it’s hard to keep people’s attention for that length of time.

He thought the opening match for the Intercontinental Championship was terrific, and he thought the three performers engaged the audience early and often. He adds that this was one of the greatest openers for a WrestleMania he’s seen. In terms of the Smackdown Women’s Title Match he notes that Charlotte is a star, and he’s a fan of Asuka as well. He thought these two women had a good physical match and he doesn’t think there’s any shame in one loss for Asuka.