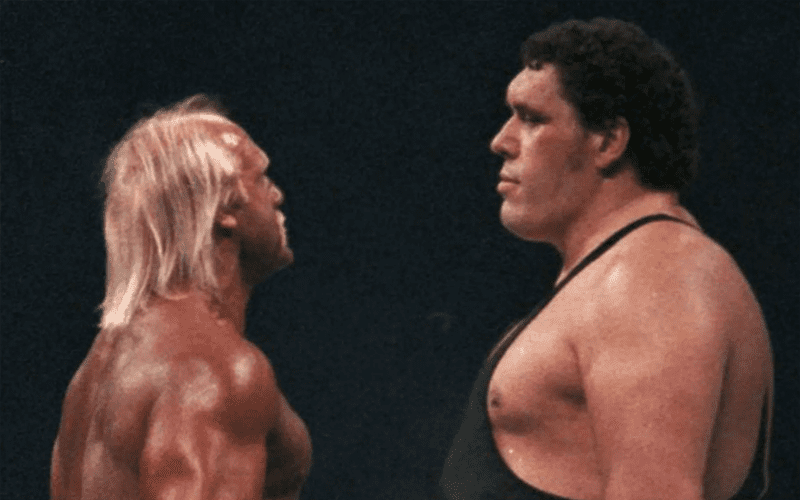 The Immortal One has been in the headlines a lot recently with speculation of him returning to the WWE after he was fired from the company back in 2015. (I’m sure you know why at this point.) Hogan has also been promoting the new HBO documentary on Andre the Giant, and was front and center for the films premiere in Los Angeles considering the pivotal part he played in the deceased Giant’s life. Now HBO has released a deleted scene from the doc where Hogan recalls a story of Andre teaching him a valuable lesson…the hard way.

I can think of a time where I talked a flight attendant into coming to the matches in the Capital Center, and I made the mistake of walking in with her all proud that I got this hot flight attendant with me. Boss saw me, right? So, like an idiot, I put her at ringside. Well, guess what? Not only did he carry me around like a stork, you know, with my yellow trunks with all my junk hanging out, you know? He had put my head down on the bottom rope and tied me to the bottom rope right in front of her and put his foot on–(GRUNTS) “No girls!” You know? And just like, choking me out on the bottom rope. Well, I learned my lesson. No more girls to the matches. Okay? I get it. I’m here to have a match, tell a story, protect Andre’s body, not hurt him, not show off to some girl and show ’em how hard I can beat on the Giant.

H/T and Transcribed at RingsideNews

The film will air on HBO on April the 10th. Looking forward to hearing more stories about the legendary Eighth Wonder of the world.