Jericho begins today’s show by informing that this year’s WrestleMania is not being promoted as “WrestleMania 34” because Vince McMahon hates the numbers. McMahon thinks the numbers makes the event seem old, and for similar reasons the event is no longer allowed to be referred to as the “Granddaddy of Them All”. 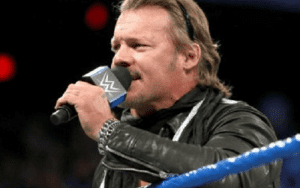 Getting into this year’s matches, Jericho begins by discussing the Andre the Giant Memorial Battle Royal. He points out that this match allows a lot of WWE Superstars to get on the WrestleMania card, which is great because all of these performers work very hard all year long. Jericho suspects Matt Hardy or Bray Wyatt will win this match because they’re the two biggest names in this match.

He points out that he’s not working WrestleMania this year because there’s really nothing for him to do. He wasn’t interested in returning without a captivating story, and if you’re working the Battle Royal you rarely have a storyline. Hardy and Wyatt are the exceptions to that rule, and for that reason he assumes one of those guys will win.