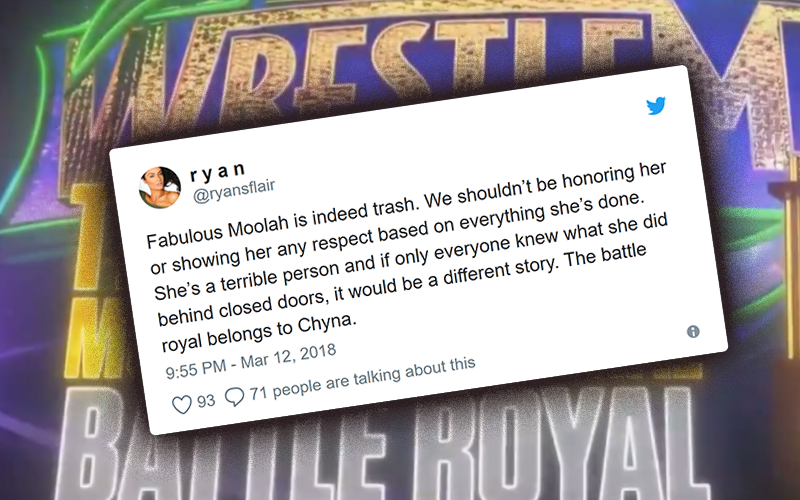 As seen on Monday’s episode of RAW, WWE announced that there would be a Fabulous Moolah Battle Royal at Wrestlemania event featuring the female superstars of all the brands. This includes some talents from NXT, as we previously reported.

While the match included praise from female WWE Superstars on social media, it didn’t go over very well with tons of fans on social media. For those not aware, Moolah had been a controversial figure in wrestling for many years with accusations being made about her exploiting other women. Those accusations can be read here.

Below are some reactions of the Moolah announcement on Twitter:

The "Fabulous" Moolah was a serial abuser of women in every way possible. She made her career off of the suffering and exploitation of young women who trusted her with their lives & safety. She shouldn't be honored by WWE — they should be ashamed that they enabled her. #RAW

The Fabulous Moolah was a serial abuser. She made a career off the suffering and exploitation of women who trusted her with their lives & safety. She drugged women to keep them controlled. Sickening. https://t.co/ICl65ah1eO

In case anyone didn't know, The Fabulous Moolah was a fucking horrendous racist scumbag who sexually exploited black female wrestlers.

The WWE, is naming a battle royal after her in the name of "female empowerment." pic.twitter.com/uPh3OmydmM

Fabulous Moolah is indeed trash. We shouldn’t be honoring her or showing her any respect based on everything she’s done. She’s a terrible person and if only everyone knew what she did behind closed doors, it would be a different story. The battle royal belongs to Chyna.