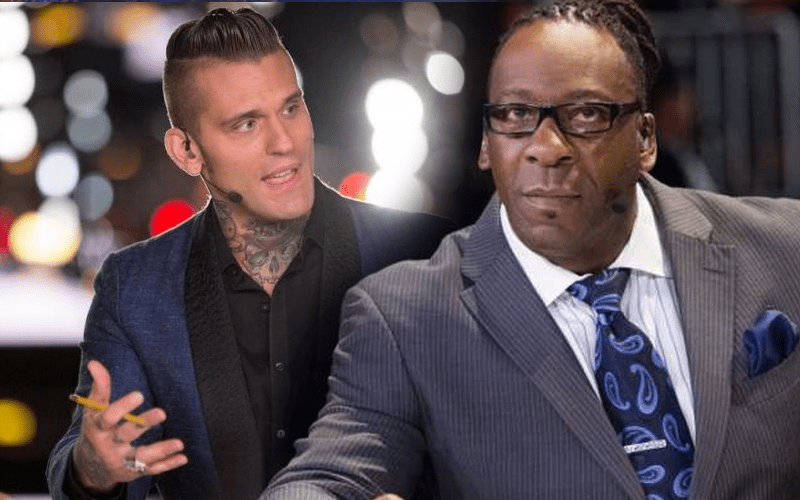 While appearing on Heated Conversations, Booker T talked about his demotion from the RAW announce team to the kickoff preshow panel and mentioned that he’s no longer a part of the team because of Corey Graves. Below is a transcript of what he said, courtesy of James Oliver.

“People ask me about Corey Graves. Corey Graves is good at what he does, you know? Corey Graves, he’s thrown jabs at me, I’ve thrown jabs back, you know? And you know, the thing is Corey Graves, of course, yeah, he’s a college educated young man. His vernacular is a little different than mine. You see that word I just used? Threw that out there – just want you people to know, I ain’t studied this, it’s just something that we just threw out.

That’s how hot I was getting. That’s how close I was getting. So, they said, ‘Hey, Book. We’re gonna take – step back a second, alright? We’re gonna regroup, alright, we’re gonna press the rewind button. We’re gonna send you back to the Kickoff show of SmackDown, Monday Night Raw pay-per-views and cool you down for a second. Cause we don’t want you to do anything to Corey Graves, because we know what you could do to him. We know Corey Graves could do… he’s sitting there for a reason, man. He’s sitting there for a reason, and Corey Graves knows it.

You know what? I’ll tell you this here. I want all you people out there to know, you heard it right here Heated Conversations, Sports Radio 610, it’s probably gonna make all the dirt sheets like Meltzer and all those guys. But if I catch Corey Graves on the street, I’m gonna do something to him. Alright? I ain’t gonna do it at the office or anything like that. But if I catch him… not gonna do it in the airport, nah, I’m not gonna do that. But if I catch Corey Graves on the street? You see that little bouffant hairdo he got? I’m gonna rearrange it for him. Alright? I’m just saying. I’m just saying… Let me catch him at Starbucks. I’m a tattoo him…

He’s one of those guys gonna have to walk it like he talk it… Me personally, everybody knows my reputation… I get mean, when you mess with my green. And right now, my green is being messed with, you know what I mean? So, me and Corey Graves… WrestleMania coming up, right? There’s room for one more match. Right now, on my show, Heated Conversations, Sports Radio 610, I’m calling Corey Graves out to a fight. Not a match. Not a pre-show posedown or anything like that. I’m calling Corey Graves out to a fight.”

Do you want to see Booker T fight Corey Graves? Sound off in the comment section below…