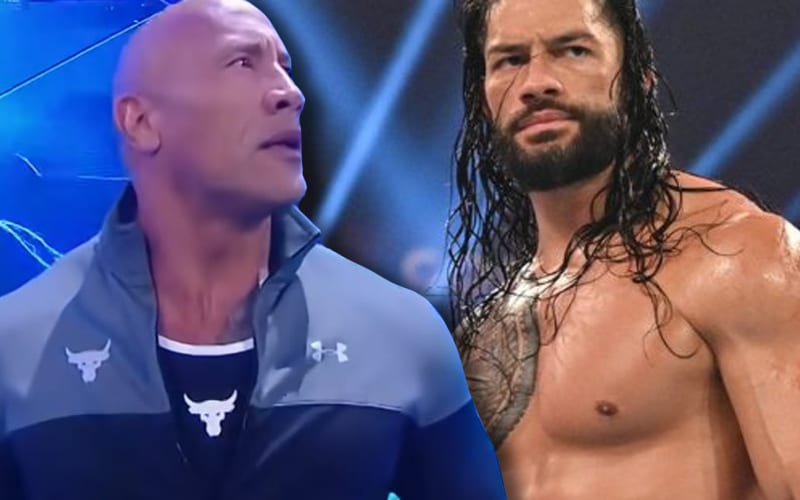 The Rock and Roman Reigns have yet to lock horns, but it is still a possibility. The odds would be much better to have that match in the pipeline if not for the COVID-19 pandemic.

During Ariel Helwani’s MMA Show, Roman Reigns was asked about a potential match against The Rock. That dream match has yet to happen, but it was certainly teased when the event was set to be SoFi Stadium.

Helwani asked Roman Reigns if that match would have happened if not for the pandemic. He said there would have been a lot better chance of it taking place, but The Tribal Chief is happy about how things turned out.

“I’d say there’d be a lot better chance, but I like how everything happens because no disrespect Tampa stadium, and obviously the conditions we’re in, it’s going to be less people, but I’m grateful if we have 1,000 people out there. It’d be awesome. If not, even just the opportunity to go out there and perform in general, it’s fabulous, but we can’t lie about it. Dallas is humongous. Jerry World is giant, AT&T Stadium.”

“I’ve already done that. Over 100,000 people. Main evented that spot. Huge and then the following year, I’m in his backyard. Imagine me with another couple years of this dominance. In Hollywood, which is, God willing, the obvious next step if available, if everything happens correctly and it’s just meant to be. People in my position typically end up there. To be able to continue to build and then be able to tell that story with him, if he’s down, it’ll be cool.”

“I want to create the largest, most monumental moments that sports entertainment can hold, so if that involves him in the picture, absolutely, and it all comes back, and I think he would agree to this, it all comes back to the audience. What do our fans want to see? What’s going to entertain them? What’s going to create that escapism to where they feel like this isn’t even real? Those are the moments that I want to create, that Avenger-level, ‘my God, what am I watching here? I didn’t even think this could be created.’ That’s what I’m looking to do.”

The Rock might come back for another match, but there is a lot that he will need to work out in his busy schedule first. Hopefully, they can deliver that dream match because it’s been brewing for quite a while now.