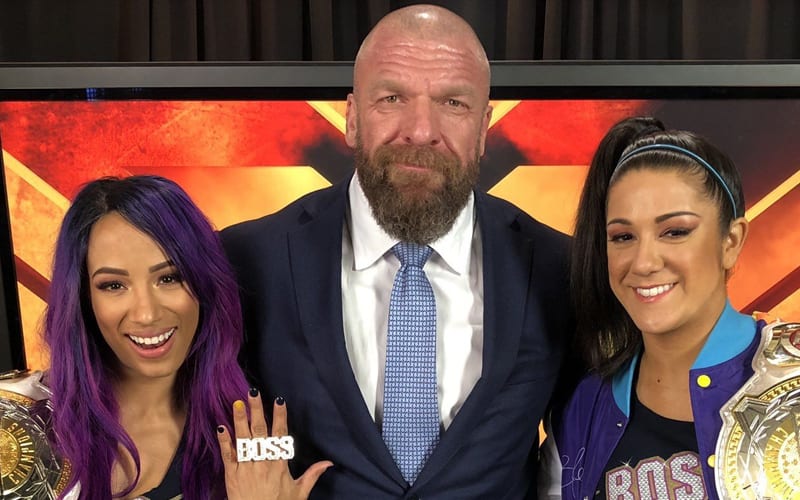 WWE’s Women’s Evolution is something that the company is very proud of. The women on the WWE roster have also scratched and clawed their way to a spotlight, but they also received a lot of help behind the scenes.

While speaking to Bloomberg Business of Sports, Stephanie McMahon was asked about the increase in female fans that WWE has received in recent memory. She credited that demographic’s growth to the work that her husband Triple H put into the Performance Center, training women and men on the same level.

“What happened was we started training and recruiting elite athletes, both male and female, at the Performance Center. I do give all of the credit to my husband. He started really recruiting these elite athletes and he started training women the same as the men. Started giving them the same match times, the same opportunities. And what happened was on NXT, which was our developmental at the time, our fans started chanting ‘women’s wrestling.’ It really gave rise to our fans and empowered them to make change on RAW and Smackdown.”

“It was actually 2015 where we had a women’s tag match that lasted all of 30 seconds in a three hour show. And our fans had had enough. They actually started a hashtag called #GiveDivasAChance, calling for longer matches and better storylines. So we responded in the biggest way we could. And then a year later, at WrestleMania, we rebranded the Divas division as the Women’s Division, we announced we’d call them superstars and created a new championship similar to the men’s belt.”

“Since that time our women have been more regularly headlining and main eventing all of our programming, including WrestleMania 35. Ronda Rousey, Becky Lynch and Charlotte Flair broke the gross entertainment revenue record at Met Life Stadium. Not only that but in Abu Dhabi we were actually able to have a women’s match. During that match a chant broke out of ‘this is hope’, which isn’t a normal WWE chant. Alexa Bliss and Sasha Banks saw tears in the eyes of little girls in the front row. And now we’ve had not one, but two women’s matches in Saudi Arabia. And there were chants of ‘this is awesome’ in those matches, which is exactly how it should be.”

WWE hasn’t presented a female main event at WrestleMania in a couple of years, but their time is likely coming again soon. We’ll have to see what’s in the cards because a huge name like Ronda Rousey could certainly help in that regard. Triple H’s efforts to elevate the women in NXT as the cultivate new talent cannot be ignored either.