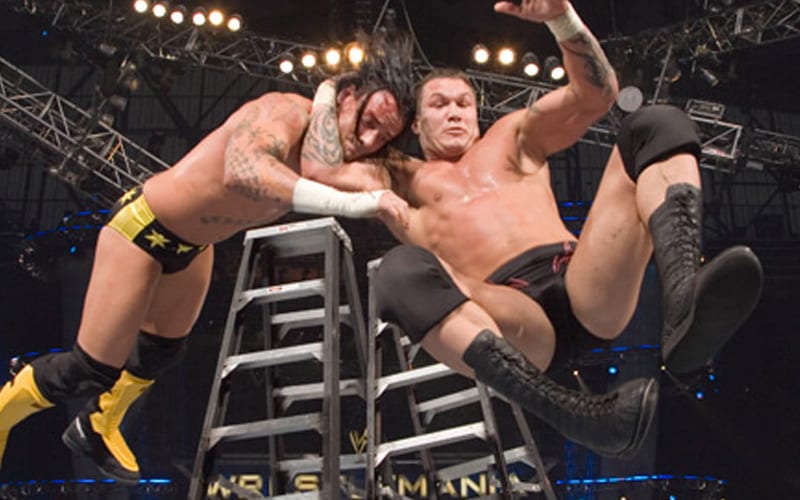 Randy Orton put tons of opponents down with an RKO outta nowhere, but everything has to start somewhere.

During the Broken Skull Sessions, Steve Austin asked Orton how he was given the RKO finisher, and how he came up with the name. This move, very similar to DDP’s Diamond Cutter, is now a trademark of Orton’s, but he can’t take credit for all of the amazing ways he has hit that finisher.

“As far as the move goes, of course there was the Diamond Cutter, and of course there was the Ace Crusher. So, Laurinaitis and me, Laurinaitis had my back. I was trying this move off the shoulder, I believe it was called the Overdrive. It was hurting my shoulder a little bit, which had already been fixed up, and then Laurinaitis said, ‘hey man do the Ace Crusher.’ I said, ‘Okay,’ Change it up a little bit. Holy sh*t — Thank you Johnny because now I got this thing I can hit anybody with from anywhere. There’s no setup, no nothing. Just BOOM — and it just happens.”

“As far as the RKO, the first night I was doing it on TV it might have been against Hurricane Helms, Shane Helms. Vince is walking in the hallway, we needed a name for this thing, you know my name Randy Keith Orton, like my initials I came up with like ‘RKO, TKO, KO, KO, KO, KO, KO, Vince, what do you think?’ He just never skipped a beat, kept walking, never changed his stride and he said ‘I like it!’ That was it. The next thing you know it’s ‘RKO, RKO.'”

Randy Orton admitted that he is a lucky man. His initials had “KO” in them, and Vince McMahon likes the idea of inserting “knock out” into his characters’ names whenever he can. The fact that the move could be hit on anyone was an added bonus.

Alexa Bliss is set to take on Orton at Fastlane. We’ll have to see if she eats an RKO tonight on the road to WrestleMania.

You can check out the clip below. We have also dug up a Top 10 video of great RKO’s.