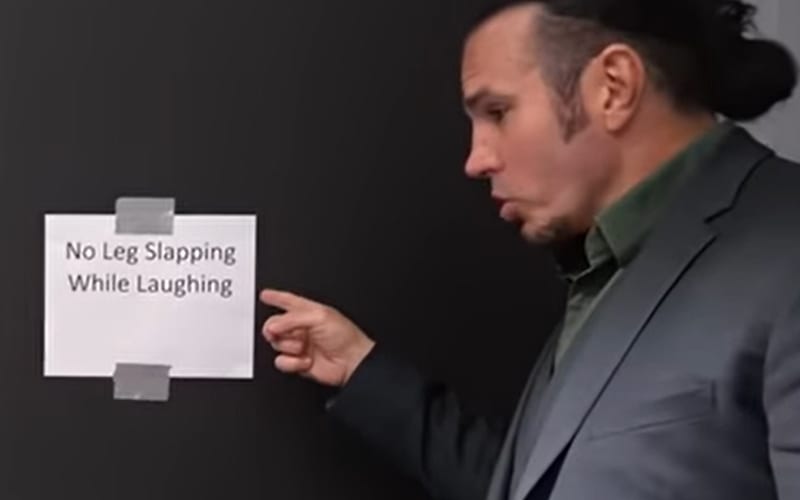 WWE instituted a ban on leg slapping during strikes. Vince McMahon saw a top Superstar do it on SmackDown and he decided that’s the last he wants to see of it. This has been a topic of conversation since the news broke.

The company posted signs backstage informing Superstars of this ban. Don Callis even used it to sell some new merchandise. During Being The Elite this week, the Young Bucks also had a good time with the idea.

The Young Bucks were backstage during Being The Elite when Christopher Daniels tells a joke. Matt Jackson slapped his lag while laughing and then everyone in the room froze. This is when Matt Hardy, who apparently owns the room they were in, pointed at a sign that said: “no leg slapping while laughing.”

Hardy then told Daniels to get a $500 fine from Matt Hardy. Nick Jackson said this was immature, “that’s a weird-ass rule to do on the boys.” Matt Hardy admitted that he noticed younger guys were slapping their legs too much, so he started fining them.

This resulted in Matt Jackson saying that “this place is getting too corporate” after Nick Jackson said: “Maybe that’s why VKM did that.”

Obviously, this was a dig at WWE, and a pretty good one. Wrestling fans who follow backstage news will certainly get this joke. It’s also another instance of AEW giving WWE a spotlight while taking a stab at them.