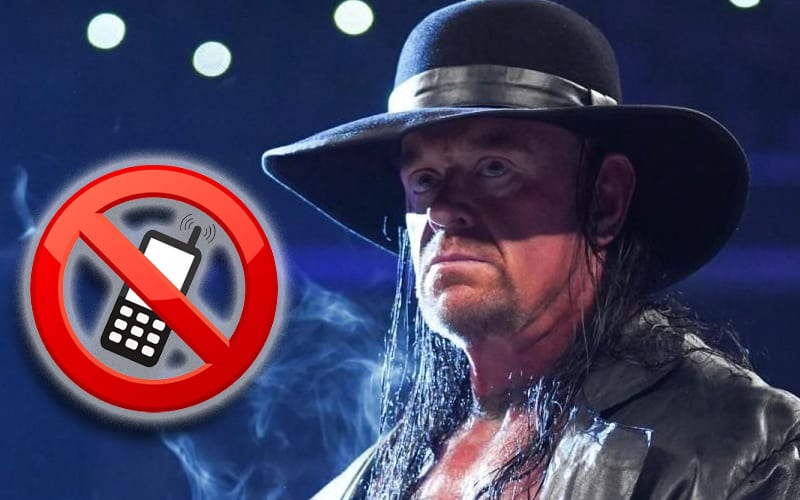 The Undertaker was locker room leader in WWE for years. It was very important not to upset him, and Matt Cardona learned that lesson in a big way.

During MC! True Long Island Story podcast, Matt Cardona talked about a time when WWE was on tour in Mexico. He and Brian Myers were on their cell phones during the main event match. Then Undertaker gave them a look over it, and they needed to apologize. Then Taker made them apologize to the main eventers including Triple H.

“It was overseas, we were in Mexico. I believe the main event was Vladimir Kozlov vs. Triple H. It’s like the last night of the tour, so how many times have I seen this match? (laughs) All the boys are sitting, watching the monitor and Hawkins and I are on our phone, Hawkins claimed he was just checking the time in this exact instance. The Undertaker gives the ‘Undertaker head snap’. Basically, you know, ‘disrespectful for being on your phone bla bla’, and he’s pretty pissed. I’m like ‘okay, this is The Undertaker, locker room leader, pissed!

“So afterwards, Mark Henry pulls us aside, he says ‘Go up to Taker, you need to apologise’ and I’m like ‘okay, you’re absolutely right’, so Hawkins and I pull him aside, we apologise and he’s super cool about it. He’s super cool because we were really respectful, but he’s like ‘you really need to apologise to the guys in the main event’, so I’m like ‘okay so we’ll apologise to Vladimir Kozlov’, I don’t even know if we did. Maybe we did but he doesn’t know what’s going on, we love Oleg, Oleg’s the best, one of our friends from the deep south.

“So Triple H, I’ll never forget, he’s in like a private dressing room and we’re like (mimes knocking at door) ‘excuse me, Triple H? we were on our cell phones during your match, we’re very sorry, it was disrespectful’ or whatever we said. He played it off like he didn’t care but I was like ‘oh man’. This happened when The Edgeheads were not with Edge anymore, it was like the beginning of the end, so I’m not sure that did us any favours.”

This was certainly a big lesson to learn on tour. It also gives a good idea about the amount of respect that is needed backstage in WWE. There is a certain amount of etiquette needed and there will always be someone around to set people straight if they break that code of conduct.