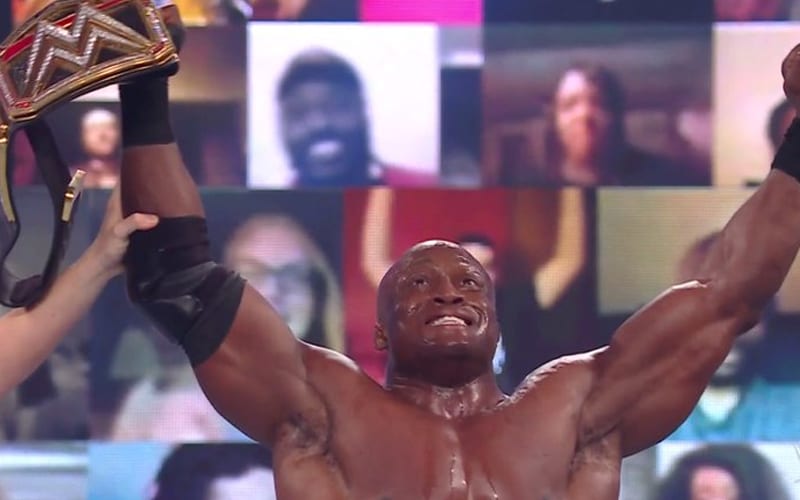 Bobby Lashley helped The Miz win the WWE Title at Elimination Chamber, and he called in his favor in a hurry. The CEO of the Hurt Business was set to get his title shot on Raw this week, but the A-Lister had other plans to prolong the evitable.

Lashley came out to the ring at 9:00 PM on the dot, the time when the WWE Title match was advertised. The Miz’s music hit, but he didn’t come out. Instead, they showed him doubled over backstage.

The Miz said “it’s coming out both ends” while selling how sick he was. John Morrison was there as well to show sympathy.

Adam Pearce told The Miz that there better be a “damn good reason why” he was not in the ring. Then Lashley got tired of waiting. He went backstage and assaulted the A-Lister before Adam Pearce moved the title match up another hour.

When 10:00 PM EST hit, The Miz finally came out for his mach. The Miz tried to talk about things before the match started. He suggested that Lashley should wait until WrestleMania to face him for the WWE Title. MVP turned down the offer and decided to have the match right away.

The bell sounded, and The Miz ran off with the title, causing a count out. Bobby Lashley won the match, but there was no title change. The match was move once again to 10:50 PM EST. Shane McMahon said if The Miz didn’t defend the title then it would be stripped from him.

When the time finally came, Shane McMahon made it a lumberjack match. Miz tried to hit Lashley with the WWE Title, but Lashley blocked his attempt to get disqualified.

Miz hit Lashley and then he rolled out of the ring. He was immediately thrown back in. This was followed by Bobby Lashley roughing up The Miz and tossing him across the ring.

Lashley hit a flatliner and then he hit a military press slam on The Miz outside of the ring. Miz was caught by Retribution and tossed back in. Then Lashley hit a spinebuster and geared up for the Hurt Lock.

The Miz took tapped out to the Hurt Lock and Bobby Lashley won the WWE Title. It took 17 years, but Bobby Lashley is WWE Champion.