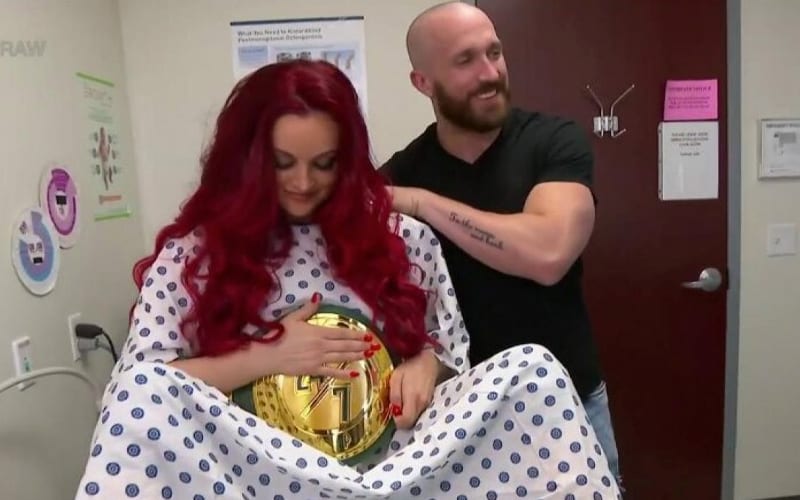 Maria Kanellis became the first pregnant champion in WWE history as she won the WWE 24/7 Title. Then she lost the title, went on maternity leave, and her husband Mike Bennett was left without anything to do. According to Maria, it wasn’t originally supposed to be like that.

While speaking to the Dropkick Podcast, Maria Kanellis said that WWE was supposed to give Mike a big singles run. He was going to become a sympathetic babyface while speaking about his addiction and an evil woman in his life. Of course, that never happened.

“It was supposed to be this storyline where I was just berating him (Mike) the whole time I was still on the road while pregnant. Then it was going to be Mike would turn on me. It was supposed to be, ‘I’m sick of your sh*t lady. I’m going to do this on my own.’ Then, I was going to go on maternity leave.  He was going to have this singles run and use all the things he had been through with dating an evil woman and having this addiction and use it as a babyface to really start getting some wins and get the ball rolling and that, of course, ended as well. Some of our segments were the highest rated during Raw. I just don’t think Vince liked it.”

Mike and Maria Kanellis re-signed with WWE, and then they were released on April 15th, 2020. The company needed to save money during the pandemic as they continued a year with record profits. WWE never gave Mike Bennett that big singles run, but it makes you have to wonder if things would be different for them if they had continued in their planned direction.