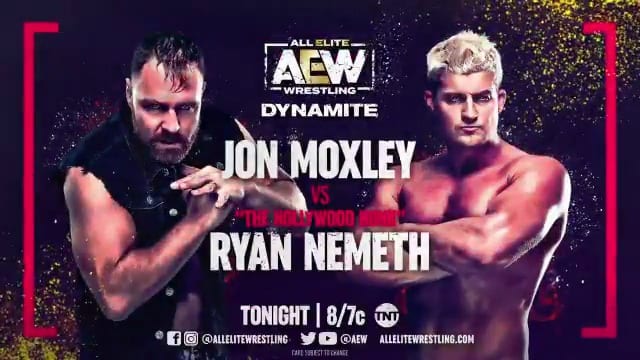 It’s Wednesday and you know what that means. AEW Dynamite will go down
tonight and Ringside News has got you covered with live play-by-play results
coverage.

Start time for AEW Dynamite is at 8:00 PM EST. Match-by-match highlights and
results from the show will take place on this very page. Feel free to leave any
reactions in the comment section below. The card for tonight is as follows:

Moxley heads to the ring to open the show. Ryan Nemeth is already in the ring. Nemeth says he’s heading for his starring role, “The Winner”

Nemeth goes for the DDT but Moxley pushes off, huge chops to the chest from Moxley. Crossface strikes from Moxley, Moxley goes for a clothesline but Nemeth ducks under, Moxley hits a backdrop suplex. Moxley works on the fingers of Nemeth. Chops in the corner, Nemeth fights out and drives the shoulder into the midsection and a big dropkick in the middle.

Moxley hits the Paradigm Shift for the three count.

Moxley sets a chair down in the middle of the ring and sits on it. Moxley says when he woke up without the AEW Championship he knew he would do whatever it takes to get back to the top. Says that is exactly what he will have to do, What images come to mind when you hear the words exploding barbed wire deathmatch? Fire, blood, burns, torture, agony, vintage Japanese magazines. Do your arms shake or do you get a sick thrill? Says he has made every bad choice in his life, he is addicted to this ring, to the feeling of laying his soul bear in the middle of the ring. Says the thought of the exploding barbed wire deathmatch is too attractive, he cant resist it, says Kenny is the last in a long line of guys who tried to take him out. Win lose or draw, you will know he gave us everything he had. If it all comes to an end at Revolution, it seems like an exploding barbed wire deathmatch is a perfect way to go out.

Interview with Archer and Fenix. Archer says he was the reason they were dominate as a tag team but he will kicks Fenix’s ass in the match against each other. Fenix says Archer was the worst partner he has ever had, they brawl to end the segment.

Starks and Pillman start with a lockup. Pillman gets the advantage with a kick to the face. Garrison and Pillman with quick tags while they work the arm. Starks falls the the outside and Pillman hits a dropkick through the ropes. Pillman with a rollup for a 2 count. Big chops in the corner from Pillman. Pillman goes for a springboard but gets pushed to the outside. Cage hits a powerbomb onto the corner ringpost.

Picture in picture. Cage tags in with stomps in the corner. Big uppercut and enziguri in the corner from Cage. Starks tags in with a kick to the gut. Knee to the back for a 1 count. Chops in the corner, Starks hits a snap suplex and tags in Cage. cage dominates Pillman, Pillman gets a rollup for a 2 count. Cage quickly takes back the advantage. huge powerslam from Cage. Starks tags in, Pillman tries to fight back but Starks cuts him of with a missile dropkick for a two count.

Cage tags in, huge uppercut. Quick tag back to Starks. Snapmare and Starks attacks Garrison in the corner. Pillman gets the hot tag to Darrison and runs wild on both members of Team Tazz. Garrison huge a huge suicide dive to the outside on Cage. Garrison gets a near fall on Starks, Cage breaks it up. The Varsity Blonds hit a double team powerbomb/dropkick for the 2 count. Starks hits a spear and Cage hits a diskus clothesline. Cage hits the drillclaw for the win.

Lights go out. Video plays of Darby’s body bag being driven through the desert. Its reveals Darby is driving the car and he lets himself out of the body bag. Sting makes his entrance dragging a body bag behind him. Hook is revealed to be in the body bag. Sting points to the rafters and Darby is on a zipline right into the ring. Darby hits Cage and Starks with the skateboard. Sting beats them down with him, they both take the fight to Team Tazz. Sting hits the Stinger splash on Cage, then a Scorpion Death Drop.

Miro, Kip and Penelope are backstage taking to Tony. Kip says the wedding was supposed to be the best days of their lives. Miro said they couldn’t go on honeymoon because of Orange and Chuck. Miro says they cant match him in the ring. Miro says Charles can come back to him, says he shouldn’t follow Orange. Tony gets a note asking them if they want a match at Revolution. Miro said they are childish. Miro says Chuck should be a man and be happy.

Hage goes for a clothesline, Cutler ducks under. Hager hits a wheelbarrow German suplex, and another one. Big shots in the corner from Hager. Big boot by Hager, he celebrates and hits a Hager bomb.Culter telegraphs a kick and ducks under, sends Hager to the outside and hits two suicide dives right after eachother. Sends Hager back into the rings, goes from a springboard but Hager catches him and plants him on the mat. Hager hits a giant clotheline for the 3.

Inner Circle hit the ring and beatdown Culter. Young Bucks make the save Inner Circle runs away. Matt says they don’t have to wait until Revolution, lets do the match right here right now. Judas plays but there is no Jericho. Jericho and MJF appear on the titantron. Jericho says why would they do it now when they have a match at Revolution. Jericho and MJF move out the way to reveal Matt and Nick’s father all bloody, they slam him into the truck, do the Buck’s pose and run away. Matt and Nick hits the scene and Inner Circle leave in their limo.

Papa Buck gets loaded into a stretcher. Recap of the Shaq/Cargill vs Cody/Velvet feud.

Page goes straight for Cassidy, beating him down quick. Cassidy goes for a crossbody but Page catches and slams him down. Cassidy gets the advantage by goading Page to the outside. His advantage isn’t long as Page hits a big clothesline. Page goes for a clothesline in the corner but Cassidy gets the leg up. Pages hits a dive to the outside. Page stares down Matt Hardy and throws Cassidy into the barricade and clotheslines him into the crowd. Page breaks the count and drags Cassidy back to ringside. Big chop in the chest. Cassidy reaches for Doc Sampson and then escapes into the ring. Matt hangs onto Pages leg as he tries to get back into the ring and throws him into the barricade.

Dark Order hit the ring and the ref throws out Matt Hardy. Cassidy attacks Page in the corner. Page fights out momentarily but Cassidy takes over with an armbar.

Picture in picture. Cassidy works over the arm on the outside, trapping it in-between the barricade. back in the ring, Page kicks Cassidy and throws him to the outside. Page goes for a suicide dive but gets cut off by Cassidy. Cassidy gets a 2 count. Cassidy continues to target the arm but Page fights out, using his strength advantage. Page hits a lick to the face, goes for the buckshot but Cassidy hits a strike. Page hits a rolling elbow strike for a 2 count. Cassidy hits an enziguri, Page hits a death valley driver.

Dark Order celebrate with Page. Matt says he will destroy Page and attacks Alan Angels at ringside, throwing him off the stage and through a table.

Marvez is with Omega. Callis asks what he is doing here, they have some very secret plans. Omega is working on a welding table, the drill drowns out Omega’s promo and they threaten Marvez to leave.

Recap of the woman’s eliminator tournament. Nyla Rose enters. Dr Britt Baker makes her way to the ring with Rebel.

Rose overpowers Baker. Bakers gets the headlock, Rose gets the shoulder block. Body slam to Baker. Baker walks out with Rebel. Bakers throws some boxes and kicks overs equipment. Baker makes her way back to the ring and kicks Rose in the gut, Rose catches Baker in a Samoan drop. Bakers goes up tot he middle rope but gets cut off by Rose with a gorilla press. Baker hits Roses shoulder into the corner post. Works over the shoulder on the barricade.

Picture in picture. Baker works over the shoulder, knees to the arm, 2 count. Baker with kicks to the back and then a back heel kick to the face. Baker locks in a hammerlock. Rose driven shoulder first into the corner. Baker takes off the turnbuckle.

Superplex from Rose, straight away, Baker hits a suplex of her own into the corner. Rose with a couple of clotheslines to Baker. Rebel distracts Rose but gets hit with a uranagi on the apron. Baker with a kick to Rose, Rebel hands Baker the glove. Rose catches Baker with a chokeslam. Rebel gets driven into the corner, and gets hit with a cannonball. Baker drives Rose into the exposed turnbuckle and goes for the lockjaw. Rose fights outs and picks her up for a slam. Baker rolls up Rose for a two count, hits a superkick and a second. Baker hits the crucifix bomb, into the lockjaw. Rose elbows her way out. Big right hand from Rose. Rose hits the beast bomb, is slow to the cover and gets a 2 count.

Rose picks up Baker, Baker escapes but gets caught up in another beast bomb for the 3 count.

Recap of the FTR/Jurassic Express feud. Commentary runs down next weeks card.

Lance Archer makes his way to the ring. Fenix enters next.

Fenix with a big chop to no effect, Archer with knees to the cut, Fenix goes for a hook kicks but Archer blocks. Archer throws Fenix to the top, Fenix hits a frankenstiener. Archer knocks Fenix to the mat. Archer gets thrown to the outside and Fenix hits a suicide dive. Fenix goes to the top but Jake grabs the ankle and throws him to the ramp. Fenix hits a dive on Archer by jumping over Jake. Big chops to the chest of Archer but her fights out with strikes of his own.

Picture in picture. Archer is in control. Archer misses a strike and hits the ring post. Fenix with a thrust kick to the jaw. Archer gets thrown back to the ring and Fenix hits a frog splash for the 2 count. Another 2 count. Fenix whipped into the corner and Archer gets a 2 count. Cross face strikes from Archer, Fenix kicks out at 1. Archer shouts in Fenix’s face, Fenix strikes Archer to no avail. Archer strikes back harder. Archer hits a huge clothesline on the apron.

Fenix driven into the barricade. Fenix into the barricade again. Archer with a cannonball against the steel barricade. Fenix thrown back into the ring. Big suplex by Archer. Archer goes for blackout but Fenix fights out. Fenix with a 619 in the corner and then a diving foot stomp to the back of the head. Archer with a German suplex. Archer hits old school moonsault for a 2 count. Archer with clubbing blows to the chest. Fenix fights out with chops, forearms in the corner. Strong Irish whip from Archer.

Archer celebrates. Archer offers the fist bump to Fenix, Dynamite ends with the show of respect.