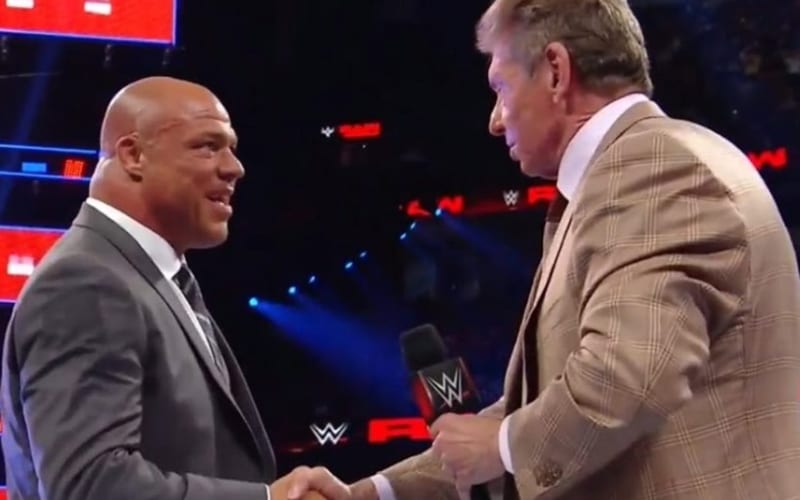 WWE Hall Of Famer Kurt Angle is a legend in the world of professional wrestling and has good knowledge as to what went on backstage in WWE and its inner workings. He also is aware of how Vince McMahon tends to be when it comes to meeting the expectations of fans.

While speaking on The Kurt Angle Show, Angle talked about WWE CEO Vince McMahon. Kurt Angle was asked by co-host Conrad Thompson if WWE is only an ‘audience of one,’ which is Vince McMahon.

To this Kurt Angle said that Vince McMahon does listen to the fans. Angle then claimed that McMahon likes to rile fans up, but has a certain psychology to it. McMahon always does something to bring the fans back.

Angle added that Vince McMahon loves the attention he gets from fans and wants to confuse fans by making it hard for them to understand what is going on once in a while.

“Vince listens to the fans, he does. Whether he does things on purpose to tick the fans off, and I think he likes to get them riled up, but he has a psychology to it. It’s not…he always does something to bring them [the fans] back.

“He loves the attention. He loves making noise, he loves doing big things and he likes making it hard for the fans to understand and confused every once in a while. Being…basically being frustrated as a fan? Sometimes it makes you want to watch even more to see if they change the stuff up.

Perhaps there is a method to the madness of Vince McMahon. However, several fans would disagree with this statement and many consider McMahon as an out of touch person who should retire.

What do you think of what Vince McMahon said? Let us know in the comments below!