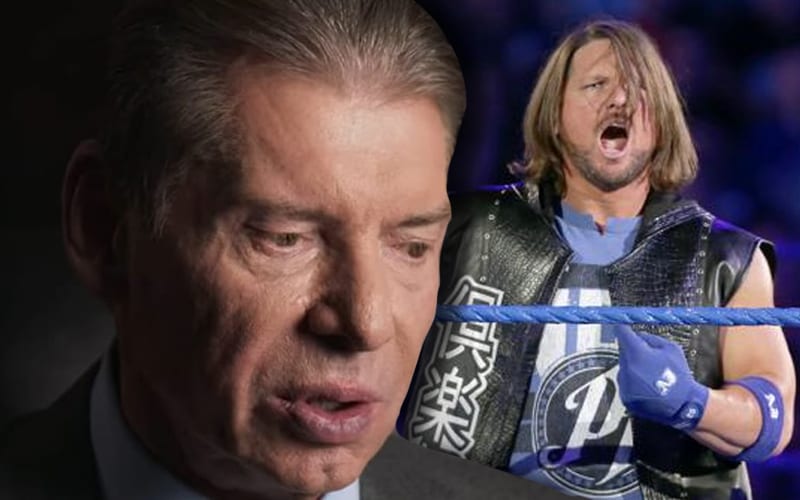 AJ Styles wrestled his entire career before finally entering WWE in 2016. He wishes it didn’t take so long to secure the Phenomenal One to a deal

During the Kurt Angle Show, the Olympic Hero revealed a very interesting communication that Vince McMahon had with AJ Styles after he won the WWE World Title. Vince McMahon expressed regret for not signing AJ Styles to a contract a decade eariler. He had the opportunity, but AJ and WWE could never work anything out until much later in his career.

“The gauge was when he came out at the Royal Rumble, and the fans were so excited it was AJ Styles. You know, a lot of WWE fans feel like, or a lot of WWE personalities don’t think that WWE fans watch TNA Wrestling. I think they do because they knew exactly who AJ was, and I think Vince saw the reactions and went, ‘Wow, this guy is a star already.’ He hasn’t even been here, you know, this is his first day, and he’s a star. I think that he had to build a name for himself, and he did it right. It’s a shame that AJ ends up in the WWE when he is in his 40s.”

“You know Vince, I was told, Vince, when he met up with AJ after AJ won the World Title, Vince went to him and said, ‘I wish I would have hired you ten years ago,’ and that is that. That tells you exactly how Vince feels about AJ. AJ is a star. He is, you know, when he came in the WWE, at that particular time, he was the #1 top best wrestler in the world. The best performer. Just from a wrestling standpoint, he was the top guy.”

John Cena was one detractor in signing AJ Styles, Robert Roode, James Storm, and others. He asked “why would we want them?” Obviously, Vince McMahon saw exactly why he would want someone like AJ Styles after he finally locked him into a contract after seeing what he can do firsthand.