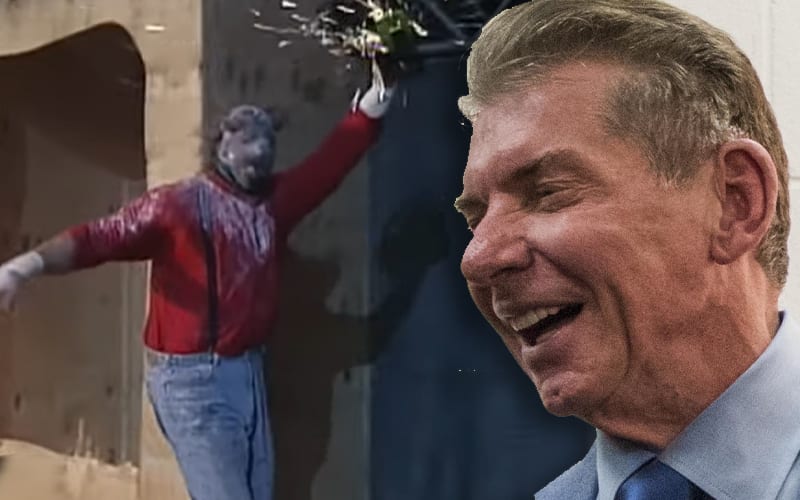 Chainsaw Charlie was Terry Funk. Everyone knew it, and in the middle of his WrestleMania match, they finally relented and started calling him Terry Funk on commentary. It turns out that his gimmick might have been a rib on Jim Cornette, the man who pulled for WWE to bring him in.

During Off The SKript, Vince Russo said that Vince McMahon finally relented to Jim Cornette’s requests to bring in Terry Funk, but he put a ridiculous gimmick on him instead.

“So, bro, during those sessions with the three of us, Cornette pitched some kind of an angle where somebody is ringside in a box for weeks. And Jim is telling Vince, this is Jim’s exact quote: “Oh come on Vince! You know that anybody who comes out of a box is over!” And, bro, Vince is looking at me like… So, to make a long story short, guess who Vince McMahon put in a box? Terry Funk! So Cornette was pushing the guy should be in a box, basically Vince was like, this is freakin’ ridiculous. Jim was pushing for Terry Funk to come into the WWE. So Vince… Ok, we’ll just bring Terry Funk in and we’ll just put him in a box. Call him Chainsaw Charlie just so he could chainsaw himself out of the box! Unfortunately for Terry, it was a 100% rib on Jim Cornette.”

Chainsaw Charlie didn’t have quite the career that Terry Funk did, but it’s hard to compete with The Funker. If this story is true then that means we have another crazy story about Vince McMahon and his creative process.

You can check out Chainsaw Charlie’s WWE debut in the video below.