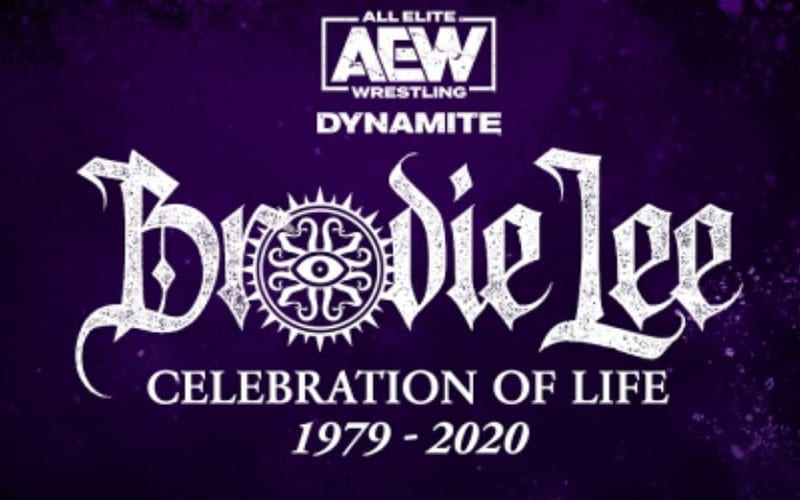 Welcome to Ringside News’ live results of AEW Dynamite. Tonight will be a tribute show to the life of Brodie Lee, featuring the Dark Order in a variety of tag team matches. Please feel free to refresh this page for constant updates while the show is airing while also leaving your reactions in the comments section.

It’s odd to think that I’ve been watching Brodie Lee wrestle for nearly half of my life. My first stark memory of him was his cage match against Claudio Castagnoli (WWE’s Cesaro) at a 2008 Chikara show. I fondly remember him as part of the Roughnecks unit in Chikara until he got signed by the WWE in 2012. I don’t know if anyone was thrilled by WWE’s usage of him, but I was truly excited to see his reemergence in AEW. I loved his match against Jon Moxley from Double or Nothing 2020 and his performances on Being the Elite made me laugh a lot. Brodie Lee was an integral part of professional wrestling being fun for me this year. The masses coming out with fond memories of Brodie Lee speaks for itself. Brodie Lee put a lot of good into this world and was taken far too soon. It’s as simple as that.

The whole roster, including Brodie’s wife and sons, are on stage for a ten-bell salute. They play a video package with words from Jon Moxley talking about what Brodie meant to him.

Matt Hardy and Private Party (Marq Quen and Isaiah Kassidy) vs. The Young Bucks (Matt and Nick Jackson) and Colt Cabana
Cabana out-wrestles Kassidy and catches him with a shot to the face. The Young Bucks incorporate Cabana into some triple team sequences. Nick lands a dive to the floor onto his opponents. Cabana follows with an asai moonsault. In the ring, Matt connects with a superkick on Hardy. Kassidy hits a suplex on Matt and he gets worked over in the Hardy Party corner. Matt lands a diving crossbody onto Hardy and hits the Twist of Fate. He makes the tag. Cabana lands another asai moonsault onto Private Party. He follows with a series of bionic elbows. Cabana catches Kassidy with the flying apple for a nearfall. Quen catches Cabana with a springboard splash. Nick superkicks Hardy, who falls to the floor. Nick punts him from the apron and takes him out with a moonsault. In the ring, Private Party hit Gin n Juice on Nick. Quen lands a shooting star press onto Nick for a nearfall. Hardy grabs a chair but Quen doesn’t want to use it. Cabana blocks Gin n Juice. The Bucks hit the Indytaker on Quen for the win.

Winners: The Young Bucks and Colt Cabana (13:37; Indytaker on Quen)

The Acclaimed come out after the match but SCU attack them from behind. The Bucks superkick the Acclaimed and Colt adds a double bionic elbow.

They show a video of Darby Allin sharing his thoughts on Brodie Lee. He quickly discovered that Brodie didn’t have an ego. Brodie wasn’t about tearing people down – he wanted to lift people up. Brodie is the #1 guy Darby wishes he could have wrestled.

Lance Archer, Evil Uno, and Stu Grayson vs. Eddie Kingston, The Butcher, and The Blade
Both teams brawl before the opening bell. Archer body slams his teammates onto Kingston. They then suplex Archer onto Kingston. Blade hits a powerslam on Grayson, who responds with a bossman slam. We head to a commercial. Back from the break, Kingston and Uno are trading strikes. Uno hits a half-nelson suplex and tags out. Archer plants Blade with a uranagi and lands a moonsault after walking the top rope. He follows with a frog splash off the middle rope for a nearfall. Kingston DDTs Grayson while looking right at Jake Roberts at ringside. Grayson DDTs Butcher on the apron. Uno and Grayson hit Fatality on Blade for the victory.

A video package is played with words from Dax Harwood, Arn Anderson, Colt Cabana, and Bryce Remsburg talking about how much Brodie loved his family.

Hangman Page, John Silver, and Alex Reynolds vs. MJF, Santana, and Ortiz
Silver and Reynolds hit Santana and Ortiz with THE PAPERS before the opening bell. Hangman gets in on the fun as well. Santana and Ortiz showcase some double team work on Silver. Santana catches Reynolds with a neckbreaker out of the corner. He follows with rolling suplexes. Hangman hits a fallaway slam on MJF and lands a plancha onto Santana. MJF retreats to the floor to avoid a Buckshot Lariat. The Inner Circle work over Hangman as we head to a break. Back from commercial, Silver is cleaning house with his power offense. He runs wild and hits a powerbomb on Ortiz. Santana catches him with an ace crusher. Reynolds double stomps Santana out of the corner. MJF whips Hangman into the turnbuckles. Silver catches MJF with a destroyer out of nowhere and dives onto Santana. MJF hits the Heatseeker on Silver for a nearfall. Wardlow enters the ring and levels Reynolds with a lariat. Eric Rowan comes out and fights off Wardlow! Hangman hits the Buckshot Lariat on Ortiz for a nearfall. MJF pulls the mask off of Brodie’s kid at ringside, so he hits him with a kendo stick! Silver connects with a discus lariat on Ortiz for the win.

They show a video with Eddie Kingston talking about how he’ll miss Brodie. Kingston says some heartwarming things to Brodie’s kids.

Anna Jay and Tay Conti vs. Britt Baker and Penelope
Baker maintains control of a wristlock on Jay. Penelope tags in and eats a flatliner. A knee strike from Baker allows Penelope to hit a german suplex on Conti. They work over Conti as we head to a commercial. Back from break, Penelope and Conti catch each other with stereo bicycle kicks. They both tag out. Jay hits a basement neckbreaker on Baker and connects with an enzuigiri. Conti takes out Penelope with a spinning slam. Jay connects with a spin kick on Baker and pays tribute to Brodie. Baker hits a fisherman neckbreaker on Jay for a nearfall. Penelope hits a blockbuster on Jay but she won’t stay down. Jay applies a sleeper hold on Penelope for the win.

Tony Schiavone comes to the ring to interview Britt Baker. Baker calls the match rigged – the whole thing is a Big Rig. Thunder Rosa attacks Baker as referees storm the ring to separate them.

Next week: Snoop Dogg is here; Kenny Omega vs. Rey Fenix for the AEW Title; Jon Moxley returns; Hikaru Shida vs. Abadon for the AEW Women’s Title; The Young Bucks and SCU vs. The Acclaimed and TH2; Jake Hager vs. Wardlow; Cody Rhodes vs. Matt Sydal

A video is shown of Chris Jericho talking about his history with Brodie Lee.

Cody Rhodes, Orange Cassidy, and 10 vs. Team Taz (Brian Cage, Ricky Starks, and Powerhouse Hobbs)
Cody and Starks trade strikes and Starks hits a diving shoulder tackle. He reluctantly tags in 10. 10 hits a slingshot german suplex on Starks. Hobbs and Cassidy square off as we head to a break. Back from commercial, Team Taz has Cassidy isolated in their corner. He reverses a suplex attempt by Starks and makes the tag. Cody cleans house with a series of clotheslines. He hits a powerslam on Starks but then they collide on stereo clothesline attempts. 10 hits a powerslam on Starks and adds a powerbomb, paying tribute to Brodie. Starks answers with a spear for a two count. Cassidy hits a tornado DDT on Starks but gets barrelled over by Hobbs. Cage plants Cody with a flatliner. Starks hits a tornado DDT on 10 for a nearfall. Taz tries to introduce a chair into the match but Arn Anderson has one of his own. Cody hits the Cross Rhodes on Starks. 10 adds a spinebuster for the victory.

Cody is alone in the ring. He says there has never been a wrestler that was so uniquely connected to so many people. Cody introduces Brodie Lee Jr., who gets his own entrance with his mom. Brodie Lee’s son puts his ring boots in the center of the ring. Tony Khan presents him with a TNT Title. One final video tribute is played to end the show.