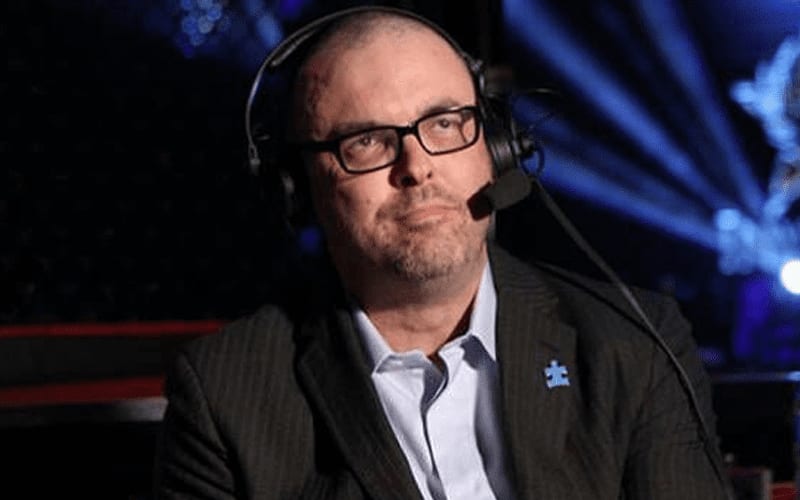 Mauro Ranallo left WWE after SummerSlam, and he hasn’t been back. He was replaced on NXT commentary, but he’s not totally done with the pro wrestling game if the right opportunity comes by.

While speaking to Post Wrestling, Mauro Ranallo was asked if he would consider a return to WWE, or perhaps try AEW. He made it clear that WWE is not on the table. He said that the stress is not conducive to his mindset, but he would give AEW strong consideration as he values the idea of competition.

“I’m not interested in going back to that kind of rigorous schedule [with WWE]. I would love to call professional wrestling still, and I’m glad that there’s many promotions. I mean, AEW has been a win-win-win for them. Like the Monday Night Wars, I believe competition in every sense of the word should bring out the best in anyone. I’m just grateful there’s that many more paying opportunities for the workers. So, never say never, John.

“For now, I want to explore other options, do more voiceover work, and maybe host a game show if I can and do the Maurologues. In the last decade or so of my career, just do something I’ve really wanted to do all my life and branch out. I’m a performer and broadcaster – I wanna do different things. I might even go back and do a radio show just for myself. I have no idea. I’m looking at other things. And, of course, the mental health advocacy.

“I wanna be Mauro Ranallo, Mental Health Advocate and Entertainer, and not necessarily the combat sports guy. I love what I do in combat sports and I can’t believe that I continue to do these historic, monumental things. But I’m eternally grateful and I have nothing but respect for people like you, and what you’ve meant to my career and your support. Like I say – chemistry. We worked very well together and there’s a reason for that. We respected each other, and that’s all I ask for in the arena that I’m in.”

Mauro Ranallo is far from finished on commentary. He was recently a voice during the Mike Tyson vs Roy Jones Jr fight. There will be many events to come with Mauro Ranallo’s voice calling the action. We’ll have to wait and see if any of those events are held by All Elite Wrestling.

AEW has a strong announce team already. Jim Ross, Tony Schiavone, and Excalibur have bonded into quite a three-man booth. Mauro Ranallo will keep his options open in case Tony Khan wants to change anything around.