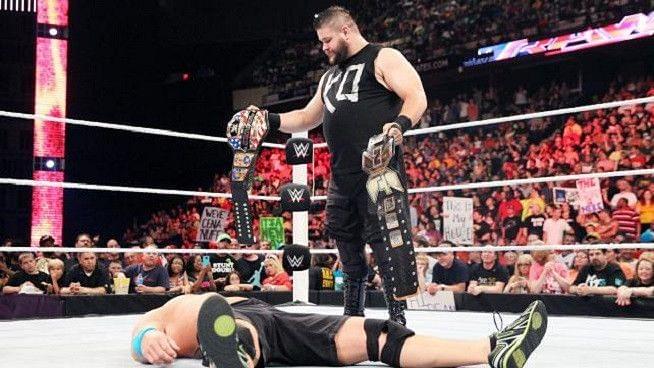 WWE Superstar Kevin Owens recently took part in a special Q&A session with WWE India. Among various questions asked by fans, he was asked regarding his debut on Monday Night RAW against John Cena in 2015.

Owens was the NXT Champion at that time. He made his shocking debut on RAW by answering John Cena’s United States Championship open challenge.

Fans were certainly elated at his debut and gave a huge pop. Owens dropped John Cena during their confrontation and then stomped on the US title while holding up his NXT Championship.

Owens went on to defeat Cena at WWE Elimination Chamber 2015 clean as a whistle, much to the delight of fans.

Kevin Owens revealed how special the debut was for him and how unforgettable it was. Here is what he said:

“So that moment with John Cena is always gonna be something I remember very fondly because I wasn’t just making my debut on RAW, I was making my debut with the absolute top face of the company. So, that was pretty incredible and it was, in a way, the beginning of my career on the main roster. But I was already having such a special year up to that point. I had won the NXT Championship, I had made my debut on live events for WWE and all that stuff. So, it just kept the ball rolling and it was a really huge moment, for me, for my family, for my career, everything. Unforgettable!”

Owens is currently scheduled to challenge Roman Reigns at WWE TLC for the WWE Universal Championship.

h/t to Sportskeeda for the quote.