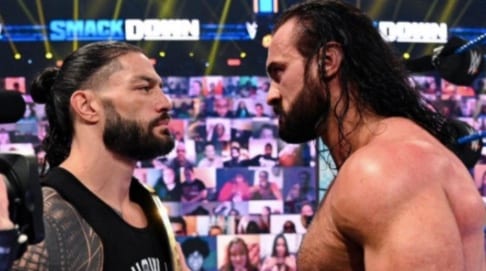 As seen on Sky Bet, the betting odds for Roman Reigns vs Drew McIntyre at WWE Survivor Series have been released.

For a few weeks now fans have been preparing to see Reigns take on Randy Orton in a champion vs champion showdown, but after McIntyre beat The Viper to reclaim the WWE Championship, it’ll now be the Scottish Psychopath who goes toe to toe with The Tribal Chief.

The two men have met in a high stakes bout before at WrestleMania 35, but it just feels like the WWE Universe is more hyped for this one given how strongly both men have been built up in recent months.

In terms of the odds, Reigns is still the favorite to pick up the win for Team SmackDown at 1/2. McIntyre is a fairly narrow underdog at 6/4, but it’d take a big effort for him to overcome The Big Dog.