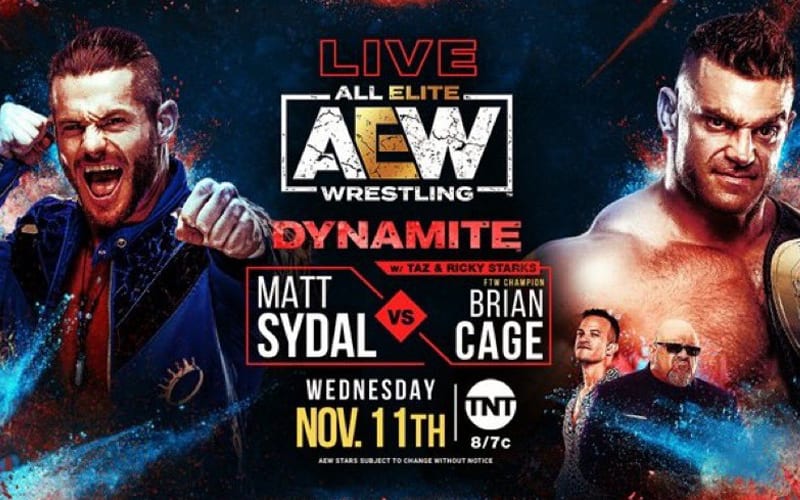 Welcome to Ringside News’ live results for AEW Dynamite from this week. This will be a live show on TNT from Daily’s Place in Jacksonville, Florida. We’ll start everything at 8:00 PM when the show kicks off.

AEW Full Gear was Saturday, and they are presenting the fallout this week. Join us as we take a look at what’s to come on AEW Dynamite, and get into the coverage.

Tony Khan promised “massive surprises” for tonight’s episode that will shift the pro wrestling world. Miro let a big surprise slip during his Twitch stream. You can check that out here.

The lineup for tonight looks strong complete with AEW’s first Bunkhouse Match with Dustin Rhodes and QT Marshall vs The Butcher & The Blade. Cody Rhodes and Kenny Omega will both get chances to speak their minds as well.

Penta vs Fenix could also steal the show as those two brothers battle. We’ve heard rumors that could be the opening match this week.

Team Taz entered and he said Brian Cage is no joke. They showed Darby Allin who was just sitting in the stands. Then the match started.

Cage took control early on by roughing Sydal up by hitting a backbreaker along with other moves. He kept focusing on Sydal’s back. Cage curled Sydal a few times and he did some reps before throwing him to the side.

Sydal tried to hit a rana, but Cage stopped him and slammed him down. Sydal had a comeback, but then Cage won with a Drillclaw.

Cody got his usual incredible and unique entrance complete with dramatic intro.

Cody addressed the weather, and congratulated Darby Allin for winning the TNT Title. Cody said that he will not be seeking a match at this time, but there is another loss he would like to be vindicated. He wants a match against MJF.

She said that Cody needs to watch his back, “Giant Killer,” because she’s not to be played with. Then she congratulated him on getting his name back. Then she revealed that her giant’s name is Shaq.

Brandi Rhodes stormed on set saying she didn’t know it was open mic night. She called Jade Cargill a bitch several times and a heffer. It was really intense, and then Jade Cargill left.

Brian Cage jumped Cody, and then Darby Allin jumped in the ring with a jacked full of thumbtacked. He did a springboard coffin drop looking move on Cage, and he took tacks. Then Will Hobbs entered to even up the odds.

The heels left, and the babyfaces looked strong.

They showed Full Gear highlights and Jon Moxley cut a promo on Omega. He thinks he will beat Omega twice.

This match got started fast. They had hay bails all over the ring and they took bumps over them. They had a guitar as a weapon, and Dustin grabbed a bullrope to choke Blade.

They eventually spilled out of the ring. Butcher and Dustin made their way up to the top of the stage. QT hit him with a fire extinguisher, and then Rhodes hit a bulldog off the stage and through the plywood.

Blade was busted open badly as he made it back in the ring. QT and Blade squared off in the ring. Blade took a trashcan lid to the head. QT nailed an elbow drop off the ladder for a two count.

Butcher and Dustin returned to the ring. Rhodes hit a Code Red that wasn’t beautiful. Bunny threw in a chair and Blade was bleeding badly. Then they hit a Full Death on Dustin Rhodes through a chair for a two count as QT saved the count.

QT nailed a Diamond Cutter, Bunny went through a table outside, then QT hit another Diamond cutter on Blade before Dustin nailed him with the cowbell for the win.

Jericho came out an everyone sang his song and then applauded themselves. Excalibur called them the “Jacksonville Children’s Choir.”

Le Champion introduced the OG Inner Circle, and they didn’t seem 100% excited. Sammy wasn’t there. Jericho asked where Sammy was and he said that Sammy got out of the hospital already. They carried on.

MJF and Wardlow were introduced next.

MJF tried not to cry. He’s only been in the business for 5 years and used his father’s loan of $1 million to get there. Then MJF read some poetry. It was a Drake song. Ortiz called him out for ripping off Drizzy.

MJF said they are also there to celebrate Jericho’s birthday. Balloons fell from the rafters, but they didn’t fall in the ring. He then said that everyone is going to Vegas next week, and it’s all on MJF.

They sang “Happy Birthday” to Jericho, and then MJF said they’re going to Vegas. They posed, and everyone seemed happy. Wonder if Sammy Guevara got a ticket.

They started out evenly matched as Shawn Spears tried to get away from Scorpio. Then Spears pushed Sky off the top rope and they moved to the outside where Sky took a bump off the guardrail a couple of timed. Then he took a bump on the apron.

They continued, and Scorpio took control, dragged Spears out of the ring, and then he tried to do a diving punch off the steps, but Spears kicked him in the face. Spears then sent Sky’s back down onto the stairs.

They returned to the ring and Sky locked in a sharpshooter. Tully Blanchard encouraged Spears to get to the ropes, and he slipped him a slug to load his glove.

Spears hit Sky for the win.

Kenny Omega cut a promo about how Jon Moxley took his spot as top wrestler in the world. He will now be more than an afterthought as he reassumes the responsibility of Best in the World.

Velvet tried to put a quick end to the match with a rapid submission chain into a pinfall attempt, but it didn’t work. Conti then hopped up, but she took a kick to the face and a backflip splash for a near fall.

Tay threw Velvet around with some judo throws and then she landed a kick for a near fall. They continued, and Tay kept kicking out of everything that Velvet threw at her.

Then they both landed a roundhouse kick at the same time and they both dropped. Anna Jay slid in a chair, and she kicked it out of the ring. Then Red Velvet landed a kick, and Conti kicked out at two.

Conti landed a pump kick to Velvet. Then she landed a Gory special into a knee lift for the win.

MJF and the Inner Circle were backstage. Sammy Guevara showed up and he said that he got an email saying to go to the beach. MJF swore that he sent a second email. Then MJF gave Sammy his ticket to Las Vegas. How much you want to bet that ticket doesn’t go to Vegas?

Eddie Kingston came out and he hyped Fenix vs Penta while saying that he will be AEW World Champion.

They started out very fast a they traded pinfalls and then Penta put Fenix in a standing submission and ripped Fenix’s mask in a big way. It was barely on.

Penta nailed a kick that put Fenix down. Then Penta continued tearing at Fenix’s mask during a submission hold.

Fenix turned around a package piledriver and took control again. He then landed a kick off the ropes and Penta lifted Fenix over the ropes, and then Fenix kicked Penta and got a near fall off of a double springboard roll-up.

Fenix nailed a cutter for another near fall. Fenix then started ripping Penta’s mask.

They continued their intense match, and Penta was sent outside. Fenix nailed a corkscrew dive on Penta next.

Fenix then nailed a senton off the top for a two count. They continued fighting and Penta nailed a kick on the apron and a package piledriver.

After the match, Kingston took the ring and he kicked Fenix out of the ring as he congratulated Penta. Suddenly, Pac entered.

Pac had a lot to say about Eddie Kingston taking over the Death Triangle. He said that The Bastard is back, and he’s made a mistake. They did a pull-apart and chaos ensued.