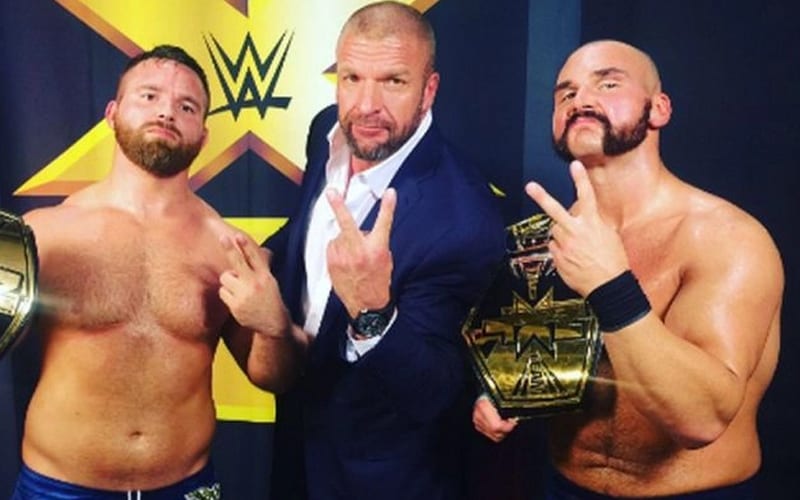 FTR loved their time in NXT as they battled American Alpha, Team #DIY, and others. They didn’t want to make a return, no matter how tempting that offer might have been.

While speaking to TalkSport, FTR said that Triple H tried to get them to make an NXT return. Dax Harwood said that Triple H “tried hard” to keep them in the company. There were no hard feelings against The Game, but they just weren’t interested in going back.

“There were talks with us and Triple H to go back to NXT and they tried very hard to keep us. It was all professional and all respectful and we were very gracious to the offers we got and to what Triple H was going to provide for us, but ultimately, we knew that our time in WWE was over at that time. We knew it was time for us to move on because money is great, and I am so fortunate and lucky to take care of my beautiful wife and perfect little six year old daughter because of professional wrestling… If we stayed with the uncertainly that would have been for The Revival, we would have done a disservice to ourselves and professional wrestling. We never want to do that.”

Cash Wheeler also added that going down to NXT was an option when they were pulled from all of their main roster dates. It was tempting, but they declined it so they could move on

“Once we got pulled from all of our dates on the main roster, it was down to NXT as the option and we talked to Hunter at length, there were offers on the table that were very tempting because we loved NXT and we loved our time there, but at the end of the day like Dax said, we knew that our time there was done. We didn’t want to go back to the past – we’d done that. We wanted to come here [AEW]. We wanted to travel the world. We wanted to be doing something that makes a difference and impacts wrestling for the better and there we were just going to be cogs in the machine.”

FTR are now former AEW World Tag Team Champions after Full Gear. They lost to The Young Bucks in a stellar match, but it might not have been possible if The Revival would have taken Triple H up on his offer to make an NXT return.