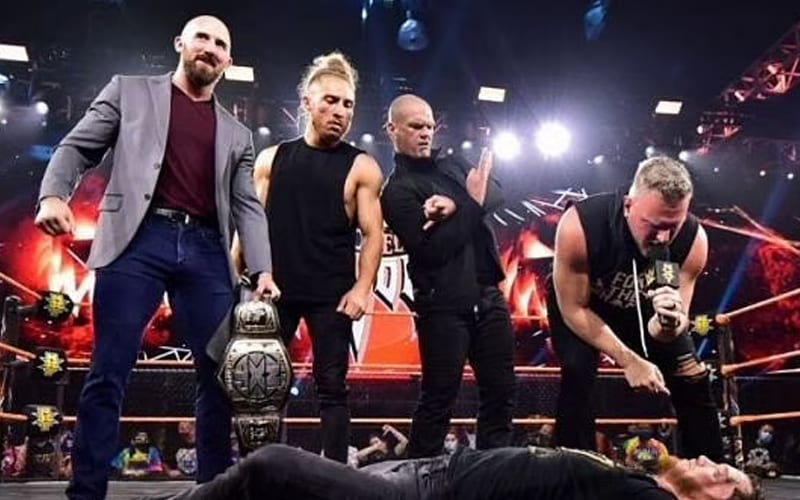 Pat McAfee isn’t done with Adam Cole, and he returned to NXT with reinforcements. Pete Dunne returned at Halloween Havoc to join Danny Burch and Oney Lorcan as they formed a new stable with McAfee as their leader. This faction could do a lot of damage in NXT, and McAfee considers Dunne his “ace in the hole.”

McAfee appeared on WWE The Bump this week where he was asked about his new faction of NXT Superstars. He’s been around NXT for a lot longer than some realize as a commentator and special contributor. Now McAfee has a union of men behind him, and he stepped in to right those wrongs after Ridge Holland’s injury caused a change of plans.

“I’ve been around NXT a lot longer than a lot of people that are currently in NXT. And whenever I saw these two incredibly handsome men get treated with disrespect after disrespect, and Ridge Holland got his entire leg broken, it felt like the right time. These two are about to rocket ship, sorry Cameron Grimes, your thing’s out of gas, right to the top, and I’m just honored to be a part of it.”

“Pete Dunne and I have had conversations for a while now. Whenever I started with the Ridge Holland plot, everybody knew and didn’t know what was gonna happen. Pete Dunne was the ace in the hole.”

Pat McAfee’s new stable does not have a name yet, but they might not need one. Those four men have a lot of capabilities, and with the NXT Tag Team Titles in the stable, half of them are covered in gold already.