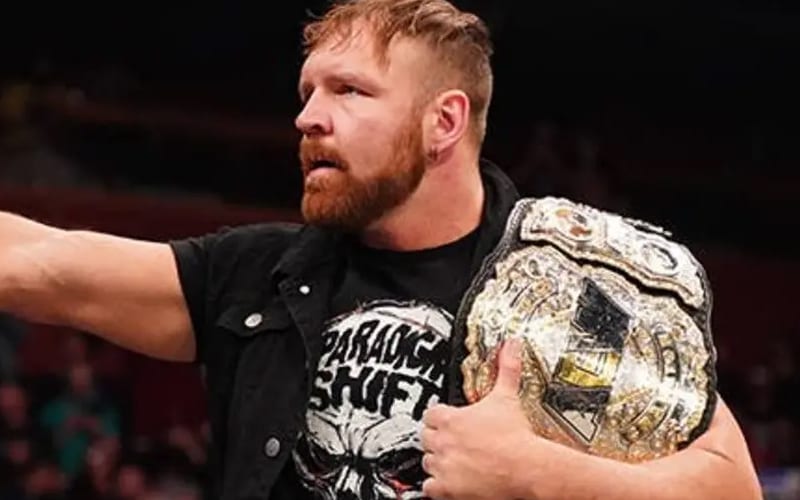 Jon Moxley is looking to defend the AEW World Title against everyone in the top tier of the company. He carried that title through the coronavirus pandemic so far, even raising the championship high in the air in front of zero live fans.

While speaking to TV Insider, Jon Moxley opened up about leading AEW through the pandemic as their champion. He feels that he is “carrying the torch” for AEW during this “weird pandemic era.”

Decades from now, fans will look back at 2020 and see that Jon Moxley was able to carry that title through a time with no crowds, and he is happy to be a part of history.

“The way I look at it is I’m carrying the torch during a weird pandemic era. Nobody is going to look back on this time decades from now saying, ‘Remember back in the day when Moxley was champion and it was like weird with no crowds and things were f*cking strange.’ A time where we had to change the card due to someone coming in contact with someone with COVID. We’re going to look back on this as a weird time, but to me it is what it is. As the good guy around here, I bring stability to an unstable world. People watch our show because they want to escape and have fun and not think about anything bad. They want us to tell stories and inspire. When you tune in to AEW, you know Jon Moxley is the f—ing world champion no matter what challenge is put in front of me. I have to keep my head held high and persevere.”

“I have to present strength to people. There was a time I was in a literal sea of fans bleeding and sweating. It was a totally different world. It has been my job to cultivate and grow this championship. It’s kind of like the Powerball. If you just flip flop a title every 30 seconds, it becomes a prop. The more you defend it against different challengers and situations and put value into it, the value goes up like the Powerball. So when someone does cash in, it’s a huge monumental moment. Chris Jericho was the perfect choice as the first champion to establish it. Now it has been my job to foster the value of the title. It’s really easy to do when you have so many talented guys to wrestle.”

Jon Moxley will defend the AEW World Title in front of just shy of 1,000 paying fans at Daily’s Place for AEW Full Gear. Eddie Kingston is determined to topple Moxley from that top spot, but being on top is a position that Moxley has certainly carved out for himself over the last few incredibly unpredictable months.