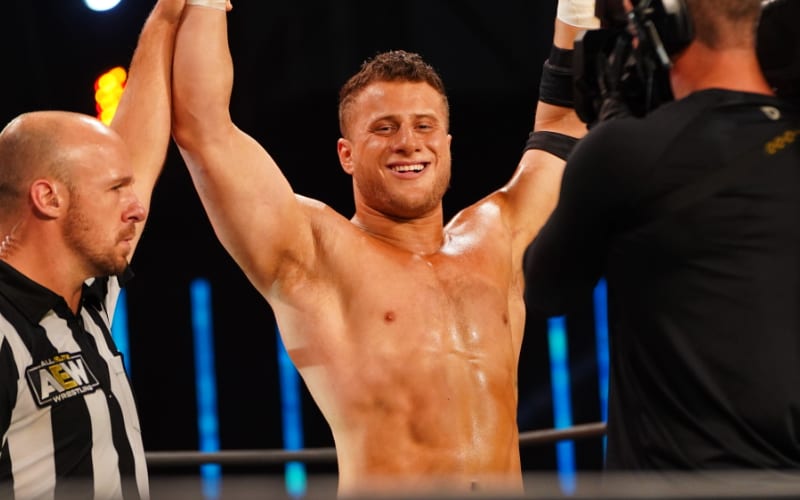 MJF is on top of his game in AEW, and he continues to impress each week. He’s a heel and his natural charisma is undeniable, but some “fans” hate him for an entirely different reason. Still, it’s not phasing the Salt Of The Earth.

Friedman spoke in the past about dealing with antisemitism. During an episode of AEW Dark, he was interviewed by Cody Rhodes where he addressed dealing with people who didn’t like a Jewish kid taking their spot on the high school football team.

“Let’s go there, we can go there — I’m gonna go there. So when I was little growing up, I played football — I loved football. For those who aren’t aware, I am Jewish — the name might have given it away and there was no other Jewish kids on my football. So, it was an adjustment for me because the other kids didn’t exactly love the fact that there was a Jewish kid taking their spot. So on the first day of practice I beat out some of the other kids who had been there a little longer than me for the middle linebacker spot and I remember the next week [Censored] and a band of douchebags walked up to me and they said, ‘Hey Jew boy’ and they threw rolls of quarters at me and they told me to pick it up and I was pretty floored and it messed me up pretty bad.”

“I remember just going home and bawling my eyes out. I learned that day that you have to kill the person you were born to be to be the person you want to be. So, I was never going to let myself be bullied ever again and I made it a point to go to the gym every day. Eat right and train right.”

“Now I can proudly say that [Censored] is a drug addict, dropped out of college. I’m famous, rich, I’m best friends with the coolest guy in the world and I’m ridiculously f*cking handsome. So, who won?”

That interview took place in October, 2019, and MJF still receives hateful messages and death threats in his inbox. MJF tweeted out an animated gif of someone nonchalantly drinking coffee with a caption saying:

MJF’s next big match hasn’t been booked yet. He’s currently in a very interesting storyline with the Inner Circle that came complete with a musical segment. Le Dinner Debonair was also MJF’s idea which provided him an opportunity to show how multitalented he really is. Hate him if you want, but MJF seems to be doing just fine.