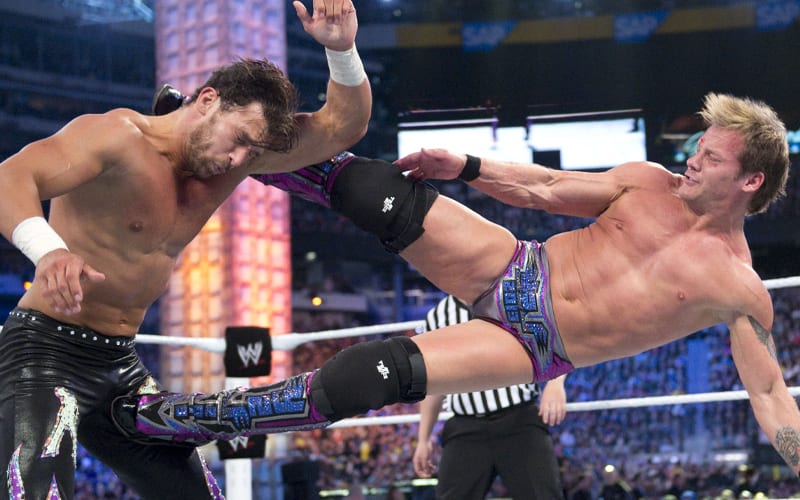 Chris Jericho is celebrating 30 years in the pro wrestling business. WrestleMania 29 featured a match that took some convincing to pull off. He was set to face Fandango, but Y2J wasn’t too sure he wanted that match.

While speaking with Inside The Ropes, Chris Jericho revealed a very interesting story. He was set to take on Fandango at WrestleMania, but he wasn’t all about that idea. Vince McMahon’s mind was made up and he wanted Jericho to take on the newcomer and make people care about it.

“‘And who am I gonna be working?’ He’s like, ‘Chris, I’m gonna have you work with this new guy, Fandango.’ I’m like, ‘Oh that’s the guy with the sh*tty, stupid vignettes,’ and I couldn’t believe it. I wasn’t incensed. I was like, ‘What are you talking about, Fandango!? This guy doesn’t even have a match yet.’ Vince was like, ‘I know but he’s the new guy and he’s gonna debut at WrestleMania versus Chris Jericho, versus Y2J. What a great way to start a career,’ and I was like, ‘No!’”

“I can’t believe now, thinking back how mad I was. Like it’s his f*cking company. Vince can put me in there with whoever he wants. I can’t be mad about it but I was so insulted and angry and I was like, ‘I can’t work with Fandango.’ He goes, ‘Don’t worry, just take 90 percent of the match and then do the finish.'”

Later on, Jericho remembers how upset he was in the end because he didn’t get 90% of the match like they agreed on. He felt double-crossed by Vince McMahon until Jericho realized that he was never promised that he would win the match.

“I remember saying, ‘Vince, people are gonna believe Fandango beating me.’ He goes, ‘That’s what I want. I want 65,000 people chanting ‘bullsh*t’. If we can get that, we got something done.’ Well there wasn’t 65,000 people chanting bullsh*t. I think there was three guys in the front row that had too many drinks that were chanting bullsh*t, that’s about it, but people were into it and the next night on RAW, which is always the craziest night of the year, the night after WrestleMania, the RAW after WrestleMania, Fandango was one of the most over guys on the entire show, and all you f*cking assholes were cheering for him. His theme song was even top ten here in the UK.”

I the end, Fandango got a great entrance into the WWE Universe. His popularity might have dwindled a bit after that, but Vince McMahon has been known to cool off when it comes to pushing new Superstars. The important part is that Chris Jericho played the role that was asked of him.