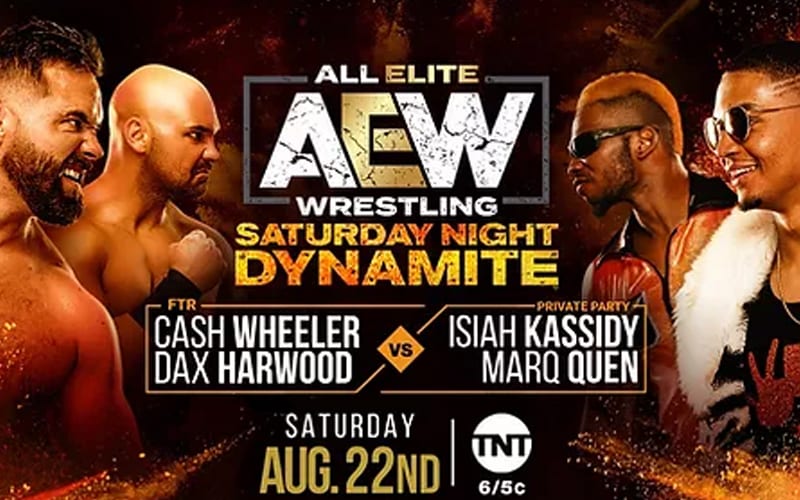 Welcome to Ringside News’ SPECIAL COVERAGE of AEW Dynamite on Saturday, August 22nd. The show will start at 6:00 PM or whenever the NBA Playoff game is over.

Cody will put the AEW TNT Title on the line against Brodie Lee this week. That should be a big match. Let’s see if Cody keeps that title.

Darby Allin will be in action, but his opponent wasn’t named.

FTR is taking on Private Party in a real eclectic contest of styles. Dark Order is also taking on The Elite once again.

Jon Moxley will cut a promo on MJF. The AEW Women’s Tag Team Cup Tournament will conclude with Ivelisse and Diamante vs The Nightmare Sisters.

Dark Order vs The Elite

Ivelisse and Diamante vs The Nightmare Sisters

Thanks to the Pacers vs Heat game, Dynamite didn’t start until just after 6:30 PM.

This match started as soon as the show started with no entrances.

Aubrey Edwards had to take control of the match early on. Tully Blanchard was in FTR’s corner.

FTR took some quick offense from Private Party and they rolled out of the ring. Cash and Dax used some tag team distraction so Aubrey would be distracted and allow them to get an advantage.

Private Party took control over Dax and they were tagging out quickly to apply a series of quick moves. Dynamite will be on Thursday next week they reminded us of that during this match.

FTR were taking offense and then begging off as their tactic. Marq Quen fought off both members of FTR when they tried to blindside him with a tag, but Dax eventually took control and laid in some thunderous chops and then he choked him on the middle rope.

Then Dax racked Quen’s face across the top rope as he continued his punishment. FTR nearly got a pinfall after a double team clothesline into a rull-up, but Isiah jumped in and broke up the pin.

Harwood tagged in and Cash went for a dive, but he missed Quen and landed on the guardrail. Isiah took a hot tag and landed some forearms and then hit a springboard stunner on Cash before kicking Dax. He then hit a flipping stunner on Dax for a two count.

Quen hit a springboard off the top for a two count on Dax next. Quen then got an inventive pin for another near fall. They traded some more near falls as Dax bridged out of a pinfall. Then Cash took the tag and he hit a spinebuster after a series of leapfrogs for a two count.

Dax was removed from the room and Isiah missed a dive as Tully pulled Dax away from him. Quen was left alone and Cash posted him before tagging Dax. They hit the Goodnight Express and that was the end of it.

MJF cut a promo from his headquarters. He was in a neckbrace. He wasn’t happy about Moxley. They want to get the Paradigm Shift banned. MJF had his “attorney” Mark Sterling said they got 5 million signatures on their petition. In reality, they got 4,390 signatures (I just checked).

They got off to a big start with the Lucha Bros hitting dives. This face fast-moving. Butcher and Blade then took the pain to QT, but he got out of a double team move and he hit a springboard handstand kick and Butcher stopped him. Then Penta kicked QT as he hung over the middle rope.

Dustin Rhodes took the tag and he started hitting everyone with punches and then he took down Blade with an armdrag and a legdrop on that arm.

Dustin ended up out of the ring and the Lucha Bros took some cheap shots. Rhodes took more abuse from the heels. Then Fenix took a tag and he hit a move off the ropes on Dustin before they went to commercial.

When we came back from commercial, it was total chaos as Luchasaurus as finally getting in the match. Jungle Boy hit a dive on Fenix and then he hit another dive on the opposite side of the ring.

Luchasaurus and Penta continued in the ring and Penta kicked out after a standing moonsault. Butcher took the tag and then Blade nailed a stunner and Butcher hit a shining wizard.

QT took a kick from Fenix and a slingblade from Penta. Then Dustin Rhodes nailed a Canadian destroyer on Fenix. Fenix and Blade started buckering and Penta pushed Blade into a roll-up pin for Jungle Boy. That’s the match.

EDDIE KINGSTON CAME OUT AND EVERYONE NEEDS TO PAY ATTENTION.

King said they all knew each other from the indies. He said they’re on TNT, but they don’t know drama. He hyped everyone on the losing team and he said they won’t take over if they’re divided. Then King got everyone to come in for a hug and he winked at the camera.

Britt Baker offered Kip Sabian and Penelope Ford a year of free dental work to join their team against Big Swole. What sold them was Baker throwing in free makeup from Rebel.

Tony Schiavone introduced Cassidy who came out with Best Friends.

Cassidy didn’t get one word out before Le Champion came out. It now says “DEMO GOD” on his video package. He got full pyro and took his time before speaking. He also had a Little Bit Of The Bubbly.

He congratulated Cassidy for beating him last week. He said it’s rare to get beaten in AEW. He’s only been pinned three weeks. One of them was to a guy who puts his hands in his pockets.

Jericho said he’s proud of Cassidy because this proved that he’s learning. Now Cassidy has proven that he has what it takes to be a main event star in AEW. Jericho wanted to give Cassidy a toast. Then he offered a rubber match at All Out.

Jericho booked a The Mimosa Mayhem Match for All Out. Then the Inner Circle beat Cassidy down.

Dark Order vs The Elite

The Young Bucks tagged in and out to take on the Dark Order. Then Omega took a tag and they hit a combo move with a fameasser.

The Bucks threw Dark Order over the ropes and hit stereo dives. Kenny stayed with Alan Angels in the ring and continue punishing him.

Kenny was stopped on the top rope. Then he was sent over the ropes and the Dark Order hit him in the head with a chair. This was followed by a stomp on the chair on the chest. The Dark Order then hit Matt Jackson with a double team dive into a suplex move on the outside.

After commercial, The Young Bucks were in control. Then Kenny Omega took the tag and the Dark Order’s underhanded tactics put him in peril for a bit. Omega returned with suplexes and a V Trigger. He tagged Matt Jackson and they tried to do a Meltzer Driver, but they were stopped by the Dark Order’s own piledrivers.

Dark Order hit a stomp off the top for a two count. Matt was getting choked while the referee was distracted. Then Angels jumped right into a double Superkick from the bucks.

The Bucks hit an assisted Indytaker and then Omega nailed a One Winged Angel for the win.

Omega hit another powerbomb after the match. He wanted kill a dude with a chair, but the Bucks had to stop him.

Darby Allin vs Will Hobbs

Allin started out by dropkicking Hobbs out of the ring before the match started. Then the bell sounded and Hobbs muscled Allin around easily.

Allin sold for the much bigger Hobbs. Darby countered a slam from Hobbs and climbed up to the top for a Coffin Drop. He won with that move.

After the match, Taz got up and cut a promo on him. He introduced Ricky Starks in Darby Allin makeup who cut a promo that mocked Allin. Brian Cage jumped the ring and took Allin’s head off with the FTW Title. Then Starks got in the ring and cut a mean promo in Allin’s face about how he’ll always be better than him. Then Starks hit a coffin drop on Allin.

During the commercial, Sammy Guevara came out to cut a promo on Matt Hardy using cue cards. Hardy came out and destroyed him during the picture-in-picture. When we got back from commercial, Hardy was destroying Sammy’s back with a folding chair. Hardy used the correct chair. Then he put Sammy Guevara through a table.

Hardy picked up a chair just like the one Sammy threw at him. The referees ran down to stop him from killing the Spanish God. “It’s not over until I end him!”

Thunder Rosa challenged Hikaru Shida at All Out.

Ivelisse and Diamante vs The Nightmare Sisters

Ivelisse and Brandi Rhodes started out the match. Rhodes got a pinfall attempt and took a bow. Then Ivelisse took control. She tagged Diamante in and they did a double team move to Brandi before Allie took the tag.

Veda Scott was on commentary, and this just needs to be said: she’s great.

Brandi put some boots to Diamante in the corner. Then Allie took a tag and they continued to apply abuse on her. The Natural Nightmares continued double team efforts on Diamante until they came back from commercial.

QT Marshall got involved and Brandi almost hit a double underhook move. Then Brandi was sent over the ropes. and Ivelisse and Diamante got the pin and won.

After the match, they celebrated next to the cup and waved their flags. Madusa was there to present them with the cup.

Brodie started out by taking control and Cody sold for him. Lee nailed two superkicks and got a two count. Brodie hit a powerbomb next and Cody wasn’t putting up much of a fight at all.

Then Cody took a discus lariat for the win.

After the match, The Dark Order destroyed Cody, Arn Anderson, and Brandi Rhodes.