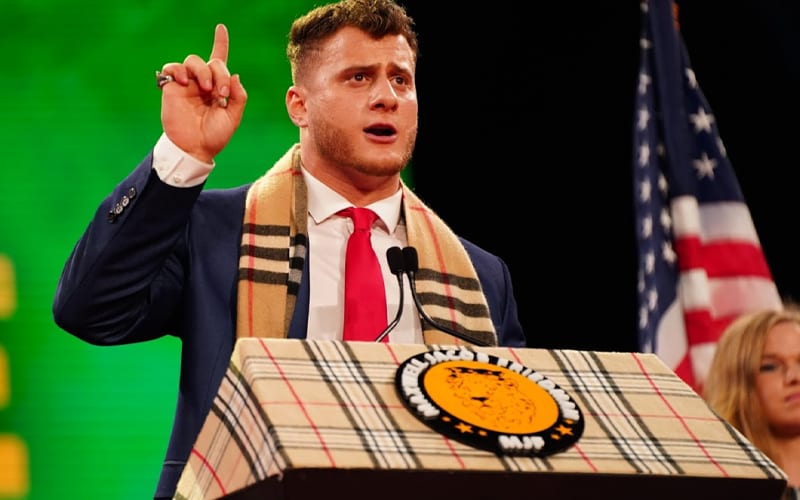 MJF will get a shot at the AEW World Title at All Out on September 5th. Jon Moxley isn’t giving up without a fight, and he has a devastating finisher to help him accomplish that goal. MJF wants to take that finisher out of the picture.

The Salt Of The Earth released a statement from his “attorney” Mark Sterling. His legal representation has started a petition on Change to ban Moxley’s Paradigm Shift from his move set while facing his client.

In a lengthy address, Sterling made his case and advocated for the revamped Dirty Deeds to be banned.

My name is Mark Sterling. I serve as legal counsel for Maxwell Jacob Friedman. Please hear my message and continue to stand with my client through this trying time. All Elite Wrestling was officially announced on January 1, 2019. One week later All Elite Wrestling’s leadership unveiled a vision to deliver a “golden age” of professional wrestling by offering change; “something new and authentic” that would make it “the greatest time ever to be a wrestling fan.”

My client believed in that vision. Wrestling fans around the globe believed in that vision. Less than two years later, however, All Elite Wrestling has failed to deliver on the promise of change. All Elite Wrestling fans deserve a dignified World Champion who never waivers and never quits, not a World Champion who is shielded by the privilege of picking and choosing who and when he wrestles.

Jonathan Moxley has long been known for his unstable, unpredictable behavior inside and outside the ring. It didn’t require a clairvoyant to predict that this behavior would ultimately result in the injury of his opponents. It wasn’t a matter of if, it was a matter of when. Jonathan Moxley’s actions left my client nearly unable to walk. The result could have been even more catastrophic, potentially ending my client’s livelihood or–even worse–his life.

Let me be clear: the events that transpired last night were preventable. If immediate action isn’t taken, Jonathan Moxley’s behavior could have a lasting impact on my client, your favorite professional wrestler or even your loved ones. My client is calling for a ban of Jonathan Moxley’s move The Paradigm Shift. The sole purpose of this high-risk move (double underhook DDT) is to drive an opponent’s head into the mat. Professional wrestlers on the receiving end of this move are subject to unacceptable levels of risk as it relates to spinal, neck and/or brain injuries.

My client has stated on the record his plan to be the top guy in professional wrestling for the next 25 years. This can only be achieved, however, if my client is able to participate in wrestling matches in a professional environment with an acceptable level of risk. For the aforementioned reasons Jonathan Moxley’s use of The Paradigm Shift must be banned, effective immediately.

Please sign this petition to make sure that your voice is heard. Help us as we continue to demand that All Elite Wrestling’s leadership recognize the safety of its performers is of paramount importance. Demand change now. Because we all deserve better: today, tomorrow and for the next 25+ years.

Of of this writing, there are just about 730 signatures for the petition. They’re trying to get 1,000 signatures, but there is no limit to how many they can get if AEW fans get behind this idea.

You can check out the petition here. Odds are this could play into MJF’s promos in the weeks to come as we approach All Out.