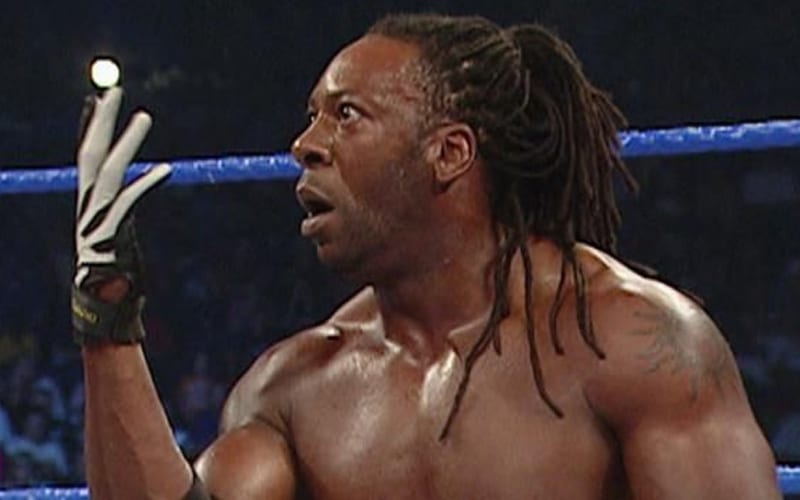 Booker T is a two-time WWE Hall Of Famer who has been involved in many different situations. One time in Impact Wrestling still sticks with him as he refused to do the finish they mapped out after changing it around.

During his Hall Of Fame radio show, Booker T opened up about a feud he had with Matt Morgan and how Impact Wrestling tried to change everything around on him.

The idea was simple. Kurt Angle was going to cost Booker T the win which would have carried on a different story. That was the original plan at least.

“Me and Matt, we always got along with each other, we always had camaraderie. We always had some sort of fellowship when we were around each other as well. It had nothing to do with Matt Morgan other than with me working Matt Morgan and I was told, you were gonna be working with Matt Morgan, and at that same time, Kurt Angle and I had some friction back and forth with the Main Event Mafia. Therefore we were gonna interject Kurt Angle into this angle, you working Matt Morgan, Kurt Angle come out, distraction, Matt hits you with the boom, the big gimmick, 1-2-3-, boom, we get Matt Morgan over. I was like, ‘Yeah, alright, I’m cool with that, no big deal.’”

Everything seemed to be working out the way Booker T agreed. Then the day of the show came and the changed up the finish. Booker T was no longer losing in a way where he would keep his heat. Instead, he was getting beat clean. This was not okay with him.

“When we got back to TV, actually to do the match with Matt Morgan after the fiasco that happened and I walked out, I guess they were gonna punish me, and then not just punish me, but make me look bad at the same time. I can’t remember who it was, might have been Pat Buck or somebody like that, I can’t remember who it was, but I remember them coming to me and telling me, ‘Hey Book, we changed the finish up on the Matt Morgan match, Kurt Angle’s not going to come out now and do anything. Matt is just going to beat you right in the middle of the ring, maybe a six minute match and we’ll just move forward from there.’ And I looked at him, and I go, ‘OK, let me think about it for a second.’ And literally I thought about it for one second, and I go, ‘I thought about it, that’s not going to happen, alright?’ ‘What’s wrong?’ I said, ‘That’s not going to happen.’ It upset me because it felt like it was a punishment.”

“I was willing to go out there and do it the way we had already laid out with Kurt coming out and it would have been perfectly fine, he would have gotten what he needed out of it, they would have gotten what they needed out of it. And then I remember Terry Taylor came back and he goes, ‘Hey Book, what’s going on? I heard you’re not going to put Matt over.’ I said, ‘No, I’m not doing that, it’s ridiculous, now all of a sudden I’m putting a guy over in five minutes when it was a certain way not even a couple of weeks ago.’ And then he goes, ‘Alright, let me go talk to somebody.’ So he left, went and talked to somebody, and came back and said, ‘Alright, we’re going to do it the way we had set with Kurt Angle doing the deal.’ And then I go, ‘After I thought about it, I can’t even do that now because you disrespected me.’ I said, ‘My last night is going to be at the PPV and then I’m going to go into the sunset and you guys will go on wherever you’ll go.’”

In the end, Booker T had no heat with Matt Morgan. It’s just business, but it was the way TNA handled the situation that left a really bad taste in Booker T’s mouth. Morgan and Booker T made sure to hash things out following that match, but Booker T still contends that they dropped the ball.