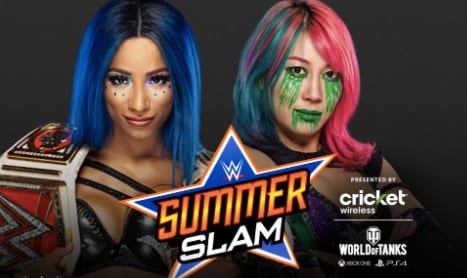 As seen on Sky Bet, the betting odds for Sasha Banks vs Asuka at WWE SummerSlam have been released.

Over the course of the last few months, Sasha Banks have been running the show in the women’s division – and that goes for both RAW and SmackDown.

Now, though, Banks’ short reign with the RAW Women’s Championship is in jeopardy as she prepares to lock horns with Asuka at the biggest party of the summer.

In terms of the odds, it really is a toss-up. Both Banks and Asuka are priced at 5/6, ensuring that even the bookies don’t really know what is going to happen at SummerSlam.

Both women should hold their heads high regardless of whether or not they walk away with the title, but if Asuka does get the job done, we do think some fans will see it as the end to Sasha & Bayley’s reign of dominance.