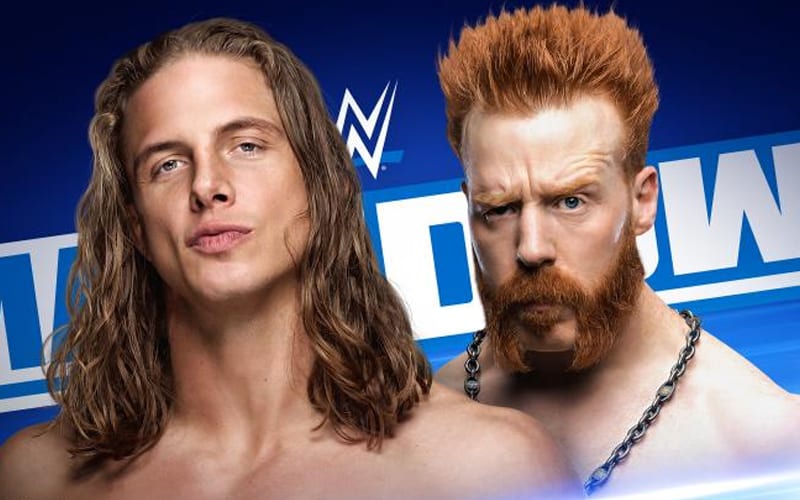 Matt Riddle vs Sheamus is scheduled to take place tonight. That could be a hard-hitting match that loosens some teeth.

There will also be a new Dirt Sheet segment this week with “special correspondent” Sonya Deville.

You can check out a bullet point list from WWE below.

Bray started out the show with a Firefly Fun House. He said that haters have been sliding into his DMs about Bliss. He said to point the finger at Strowman. All Strowman needed to do was give “him” who he wants.

Bray then said the Fiend will be here later “without someone really special.” He said he’s waiting for Braun and he needs to give him what he wants or “she’ll find out what he’s truly capable of.”

They started out and Sheamus got the first takedown with a headlock after they both tried and failed. They got back up and Sheamus nailed Riddle with a knee to take him back down. Then Sheamus continued to apply some abuse and a grinding submission hold.

Riddle grabbed Sheamus’ arm and used it to his advantage to turn it into a key lock and into a pin for a one count. Then Sheamus nailed a powerbomb to slow Riddle down.

Riddle put Sheamus on the apron and then Sheamus beat on Riddle’s chest before he scaled to the top rope. Riddle then jumped up and nailed a knee to send Sheamus to the floor.

Sheamus hit a trio if Irish Curse backbreakers, but Riddle kept fighting on. Riddle punched away at Sheamus and kicked him. Then he nipped up and nailed some running forearms in the corner. Sheamus nailed a running kick and a Broton for a two count.

Riddle got to the top rope and missed a senton, but he rolled through. Sheamus hit White Noise for a two count.

Riddle nails a German Suplex for a two count next. Sheamus nailed another backbreaker, but he missed a shoulder and he hit the post. They moved to the floor and Riddle nailed some kicks. Then Sheamus hit a knee to the jaw.

Sheamus went inside and Shorty G blindsided Riddle and the referee called for the bell.

Corbin was talking to some woman backstage. Sheamus walked up and threatened him because Shorty ruined his match. Corbin said he’s lucky he has a match with Hardy or he’d put a dent in his skull.

They showed the clip of Sonya attacking Mandy last week. Their mics started cutting out. Morrison said Retribution isn’t scheduled tonight. The Miz said “I thought they were on RAW.”

Then they introduced Mandy Rose’s hair via satellite. It was a wig on a stick with googly eyes. Yep. Miz & Morrison spoke in a bad female voice to answer for Rose’s hair.

Then they introduced Sonya Deville so she could explain herself. Sonya said she doesn’t feel bad because she doesn’t have any respect for Mandy. She was really drawing the heat.

Deville said Rose isn’t getting her revenge, but she welcomed Rose to correct her. Miz said they haven’t heard from Rose since the attack. Sonya said selfies is all she has.

Heavy Machinery came out and ran Miz & Morrison off as Sonya escaped as well.

Cesaro started things out by being very stiff with Dorado. Lince had a moment when he got to his feet, but Cesaro knocked him back down. Then Dorado sent him out of the ring. The lights started to flicker and Dorado jumped on Cesaro and sent him into the ring with a rana.

Cesaro kicked out of a two count and then he caught Lince off a springboard and he hit a backbeaker for a two count.

Dorado hit a spingboard stunner after an impressive sting of quick moves. Then he hit two moonsaults, but Shinsuke Nakamura stalled him and hit him with a forearm to the spine.

Dorado almost got a roll-up pin, but Cesaro hit him with an uppercut and a Neutralizer for the win.

The Fiend’s entrance hit and he came out with his full entrance.

They came back to the ring and Bliss was in the same spot as before from last week. The Fiend creeped up to her and acted like he was going to attack. Bliss just remained silent and watched him. Then she blocked his mandible claw and petted the Fiend’s face.

The Fiend pushed Bliss off. Then Braun showed up on the big screen. He said he doesn’t give a damn about Bliss. He just cares about destroying Wyatt. He knew when he walked into the swamp that he’s leaving 1 of 2 ways. The most evil son of a bitch ever or knowing that he ripped the devil limb from limb. Since Wyatt is in the ring now Braun is evil.

Braun said he’s a nightmare. Then he said Wyatt will face the monster at SummerSlam.

These two started out with Jeff selling for Corbin. They went outside and Corbin roughed Hardy up even more before they returned to the ring.

Corbin kept Hardy down with a submission hold and did not allow him to build up any momentum. Hardy avoided a clothesline from Corbin and he hit a sliding dropkick.

Hardy exploded on Corbin and then he got caught in a Deep 6 for a two count. Hardy avoided an End Of Days. Then Corbin landed a knee to Hardy that sent him outside the ring.

Suddenly, Sheamus nailed a Brogue Kick on Hardy and caused a DQ.

Corbin and Sheamus argued after the match.

These two had a match next. Sheamus took the fight to Corbin with some knees and then he took a kick of his own followed by Sheamus landing a knee to the midsection.

They moved outside and Corbin nailed a clothesline on Sheamus. They moved back in and Sheamus met Corbin with a knee and a clothesline over the ropes. Then Corbin took a bump into the barricade. Sheamus pounded Corbin off the announce table and then against the ring post.

Sheamus got to his feet, but Corbin put him back to the mat. Sheamus put Corbin on his shoulders, but Corbin fought off and hit another clothesline.

Riddle gave a fist bump to Michael Cole and left.

Bayley and Banks were backstage. Banks told Bayley she shouldn’t feel worried about facing Asuka on RAW next week. Then they were informed that they are needed in the ring for a video conference with Stephanie McMahon.

Steph showed up on the screen while Banks and Bayley were in the ring. She congratulated them for winning the titles they have. They thanked Stephanie for her positive feedback.

McMahon brought up some of the shady things that the Golden Role Models did to get their titles. They kissed up to her and then Steph said that Bayley and Banks will defend their titles at SummerSlam.

She announced a triple brand battle royal with the winner facing Bayley at SummerSlam next week.

Tucker and Morrison started things out. Tucker sent Morrison down and applied a hold to slow John down.

The lights started to flicker again as Otis took a tag and sent Morrison flying with a shoulder block. Morrison jumped over Otis and tagged Miz who chopped Otis, but that just hulked Otis up. He tagged Tucker and they did a double team sandwich move on Miz before he went outside and Tucker did a somersault dive on both of them.

When we came back from commercial, Miz had control over Tucker with a headlock. Tucker started to fight back, but Morrison took a tag and hit a springboard move into a double team move.

Morrison hit a cheap shot when the referee wasn’t looking. Tucker stopped Morrison from coming and he squashed Miz before tagging Otis.

Otis got the hot tag and he took some punishment to Miz and Morrison. Otis hit a splash to the corner and a caterpillar for a two count because Miz broke it up.

Tucker went into the boards and Otis hit to steps. Suddenly, Mandy Rose appeared with shorter hair and they brawled into the ring. The referee called or the bell. Then they did a pull apart.

After the commercial break, Retribution invaded the PC with baseball bats and they ran everyone off. It was brutal and strange. Then they cut the ring ropes with a chainsaw after spray painting the set.