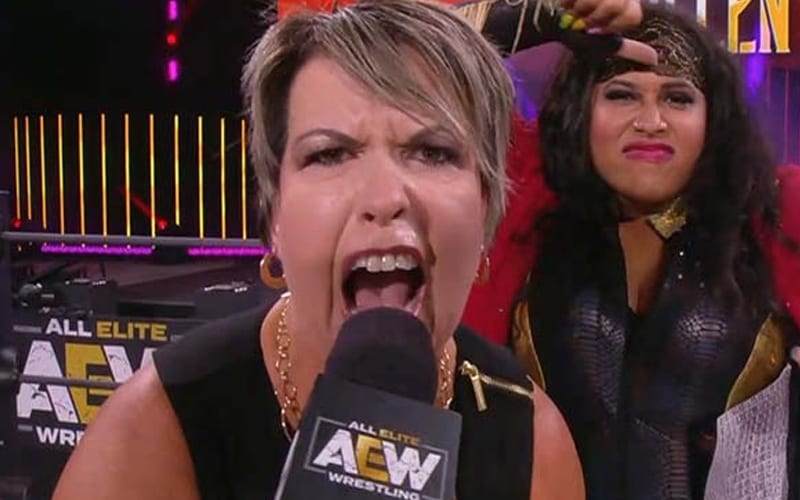 AEW brought in Vickie Guerrero to manage Nyla Rose, and now her involvement with the company is official. Guerrero says she signed with AEW this week.

Guerrero and WWE had a bit of a falling out. They stopped allowing Superstars on her podcast after she made an AEW appearance. This was followed by even more appearances for All Elite Wrestling.

During an interview with Daily DDT, Vickie Guerrero confirmed that she has signed with AEW, but the conditions were not disclosed. Vickie said she had no hesitation to sign with AEW instead of going back to WWE, she had a very clean cut reply.

No hesitation, put it that way. I retired from WWE in 2014. My focus was not to return to them. We just had a lot of just difference of opinions and things going on. If it wasn’t going to be for AEW, I don’t think I would be anywhere else, but when AEW presented that there was some opportunity, I gave 100%, just my whole being. I said, ‘I’m here for you and I can’t wait to be a team player with the company.'”

AEW gave Vickie Guerrero a fun role to play as Nyla Rose’s manager that could have a lot of possibilities. Guerrero also played many roles on WWE television from general manager to love interest.

Vickie Guerrero is versatile and Tony Khan obviously realizes all the things she is capable of. She can also say “excuse me” on AEW television because WWE didn’t lock down that copyright.