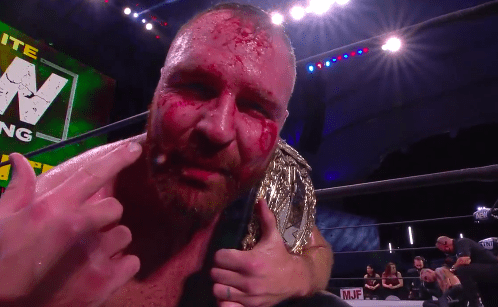 On this week’s episode of AEW Dynamite Darby Allin challenged Jon Moxley for the AEW World Championship. The young Superstar brought the fight to Mox in a gruesome fight but came up short in the end.

During the match, MJF and Wardlow interfered and attacked Moxley while the referee was distracted. Unfortunately for them, Moxley was able to win the match regardless of their sneak attacks.

After the match, Moxley commented on his match against Darby Allin in a Social Media Exclusive video. Moxley commended Allin for his “heart” and sent a clear warning to MJF, his challenger at All Out.

Moxley said that MJF has no heart and even if he did, it’s going to stop beating real soon.

That kid [Darby Allin] has got balls. That kid’s got heart. And it’s a little scrambled in my brain right now, I am not sure exactly what happened. But I got a pretty good idea. There’s a kid out there [MJF] with no heart. And even if he did, it stops beating real soon. He’s a dead man.

MJF on the other hand has been running campaigns to end the tyranny of “Dictator Moxley” and has asked the AEW fans for their vote of confidence to become the New AEW World Champion at ALL OUT.

The feud between these two will continue to build in the coming weeks until the finally settle their differences at ALL OUT on September 5th.